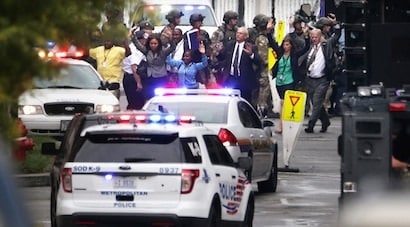 People come out from a building with their hands up after a shooting at the Washington Navy Yard Sept. 16 in Washington, D.C. (Photo credit: Alex Wong/Getty Images)

For gun control advocates and politicians, it’s never too soon to start talking about implementing new laws in order to prevent gun violence — even if it means restricting the rights of law-abiding gun owners.

Thirteen people are dead and 8 others are injured after a gunman opened fire on employees working in a military installation at a Navy Yard in our nation’s capital.

Despite the fact that none of the victims have been laid to rest and details are still emerging about the 34-year-old shooter and how he carried out this unspeakable act, pro-gun control activists and politicians want to start talking about reforming the nation’s gun laws.

In a statement released Monday evening, Sen. Dianne Feinstein of (D-Calif.) offered “thoughts and prayers ” to the victims and their families but also addressed the need for tougher gun laws.

“This is one more event to add to the litany of massacres that occur when a deranged person or grievance killer is able to obtain multiple weapons — including a military-style assault rifle — and kill many people in a short amount of time,” Feinstein said.

“When will enough be enough?” she asked.“Congress must stop shirking its responsibility and resume a thoughtful debate on gun violence in this country. We must do more to stop this endless loss of life.”

Feinstein was the chief sponsor of the Clinton-era ban on so-called “assault weapons.”  She tried to renew the federal AWB in the wake of the mass shooting at Sandy Hook Elementary School in Newtown, Connecticut.  Her latest bill, known as the “Assault Weapons Ban of 2013,” was designed to “dry up the supply of these weapons over time,” failed to clear the Senate back in April.

The Coalition to Stop Gun Violence also wasted no time in getting its pro-gun control message out.

“Incidents like the #NavyYardShooting will continue to occur with regularity until legislators stop allowing the #NRA to write gun policy,” the CSGV tweeted on Monday.

Ladd Everitt, the organization’s Director of Communications, defended the timeliness of the tweet, implying that those who criticize pro-gun control advocates for talking politics in the immediate aftermath of tragic shooting are being obtuse.

“That’s a ridiculous argument,” Everitt told ABC News. “With the type of grotesque gun violence we see on a daily basis in our society, we can’t afford to not be talking about it every few minutes, much less trying to cherry pick the moments when it’s appropriate.”

Though, the Obama administration erred on the side of caution.  President Obama only briefly addressed the incident on Monday and White House Press Secretary Jay Carney admitted that it was too soon to start debating legislative initiatives given that there is still so much uncertainty about what actually happened yesterday. 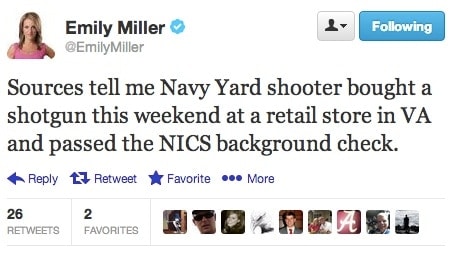 “It would be inappropriate to try to put in context something about which we have so few facts,” Carney said.  “It is far too early to say anything about who did this and the broader meaning of it.”

Carney did note that the president was still in favor of “common-sense measures” to reduce gun violence.

Mark Glaze, director of Mayors Against Illegal Guns, New York City Mayor Michael Bloomberg’s organization, intimated that the lawmakers in Washington who voted against an expanded background check bill last April, which like Feinstein’s 2013 AWB was voted down in the Senate, will have to take a long, hard look in the mirror.

“If you work with survivors every day you can’t help but feel a blow to the gut when this happens again,” Glaze told ABC News.  “And every time there’s another mass shooting, senators who read from the [National Rifle Association’s] talking points rather than listening to their constituents ought to be asking themselves some tough questions.”

Whether the Navy Yard shooting creates any real momentum for the gun-control crowd remains to be seen, however, given the commentary and recent activity it’s likely they will act fast to use it as a rallying cry for stricter gun laws.

“Their best chances of passing things are after an atrocious crime and when emotions are high and when they can ram something through without the opportunity for debate and careful consideration,” said David Kopel, the Research Director of the Independence Institute.

“The core impulse of the anti-gun movement is guns are bad and so whenever evil acts are done with guns that proves we need more laws against guns,” he told ABC News. “The specific aren’t really important.”

On the other side of the issue, some within the gun community are bringing up the notion that the Navy Yard was a “gun-free zone,” at least with respect to civilians.

What are your thoughts?  Should we wait to discuss legislative solutions to mass shootings — strengthening background checks or ending “gun-free zones”– or should we dive right into the fray?