There are more justifiable homicides in states with Stand Your Ground laws than ones without them, according to a recent study commissioned by New York City Mayor Michael Bloomberg’s pro-gun control organization Mayors Against Illegal Guns found. 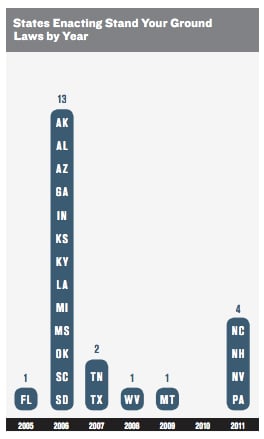 Yes, that’s correct. MAIG along with other pro-gun control outfits, National Urban League and VoteVets,  released a report on Monday that showed a 53 percent increase in justifiable homicides in states that have passed ‘Stand Your Ground’ laws, which removes the duty to retreat and allows one to use force, including deadly force, if one reasonably fears for his/her life.

In states that have not enacted SYG laws, justifiable homicides increased by only 5 percent over that same time period, roughly 2005-2011, the report titled, “Shoot First: ‘Stand Your Ground Laws and Their Effect on Violent Crime and the Criminal Justice System,” stated.

So, one could make the argument that their study backfired.  MAIG wanted a study that showed an increase in gun-related crime, particularly with a congressional hearing on SYG scheduled for this week (which ended up being postponed due to the Navy Yard shooting).

What MAIG got was a study that showed an increase in justifiable homicides, which the FBI primarily defines as “the killing of a felon during the commission of a felony by a private citizen.”

The argument for repealing SYG laws because they increase the rate of justifiable homicides is a specious one, as constitutional law professor and Research Director of the Independence Institute, David Kopel pointed out in a Guns.com interview last year.

“If it’s a justifiable homicide, by definition that means that a crime victim used necessary force to protect herself from a violent felony attacker,” explained Kopel. “To complain that the number of cases of lawful self-defense has increased amounts to saying that more innocent people should have been victimized.”

Indeed.  But that doesn’t stop gun control advocates from calling for the repeal of these, as they refer to them, “shoot first” laws.

“These laws can have deadly consequences, particularly for African Americans,” said Marc H. Morial, president and CEO of the National Urban League. “We need our elected officials to reform these policies to make sure we’re doing the right things to reduce unjustified shootings and save lives.”

It would appear that Morial didn’t even read the report.  These shootings are justified!  Though, there is a racial component to the findings.

“Among people shot to death in the black population in states with Stand Your Ground laws, the rate of those homicides found to be justifiable more than doubled between 2005 and 2011, while it fell in the rest of the country,” according to the report. 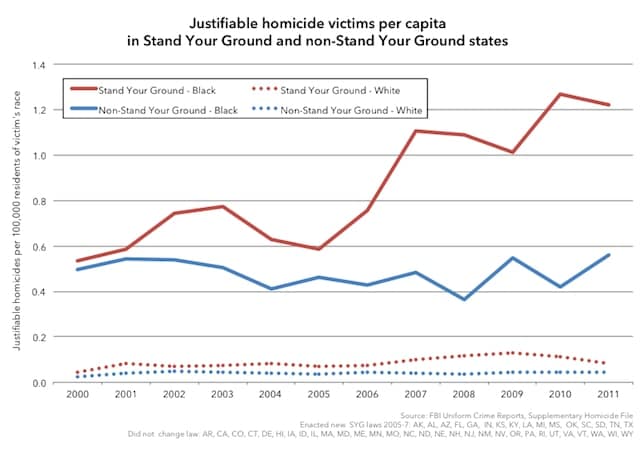 In all honesty, black or white or green, what does it matter if the person killed was a felon committing a felony when a private citizen shot him/her?

Now, the MAIG study does try to link SYG to the total homicide rate as well as the gun-related homicide rate.  It stated the following:

Texas A&M University researchers published a study in May 2012 that examined FBI homicide data and controlled for factors that might affect state homicide rates, such as the poverty rate, the number of police, and the region of the country. Holding other factors constant, it found passage of a Stand Your Ground law was associated with either a 7% or 9% increase in total homicides, depending on the statistical method used. It did not find any evidence that rates of burglary, robbery, and aggravated assault were affected by these laws, though supporters of these laws often suggest they deter serious crimes.

Overall, crime and gun-related violence is on the decline.  The homicide rate, the violent crime rate, and the property crime rate have continued to decrease over the past two decades.  Meanwhile, over that same time period, gun ownership has increased and concealed carry rights and self-defense laws have been expanded to the benefit of responsible citizens.  The vast majority of research suggests that more guns in the hands of law-abiding citizens does not increase crime.