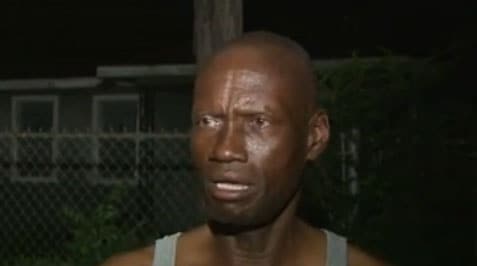 Johnny Thompson didn’t hesitate to shoot the man who he found had broken into his home.

A Houston homeowner fought back when he discovered that he was the victim of a home invasion early Friday morning.

Johnny Thompson told reporters that he awoke around 3 o’clock in the morning when he heard a loud crash coming from an upstairs bedroom. He walked outside with a flashlight to check it out and at first didn’t notice anything out of the ordinary, until he shined the light up to the second floor. That’s when he noticed that the air conditioning unit in the upstairs bedroom window was moving and he knew somebody was in his house.

Thompson went back into his home, grabbed his revolver and slowly headed upstairs, where he eventually came face to face with a man that had broken into his house. The man had used a large rock to break the window and was still holding onto it when confronted by Thompson.

“I observed this man was trying to remove the window unit out of the window,” Thompson explained. “And he stopped after he heard me and he turned around and I shot him one time.”

Thompson then called 911 to report what had just happened.

When police arrived they transported the suspect, who was suffering from a single gunshot wound to the stomach, to a local hospital. The last known report stated that the suspect was in surgery, but it is unknown what his condition is.

Investigators said that the suspect, who was high at the time, said he was breaking into the home with the intention to steal stuff that he could turn around and sell in order to support his drug habit.

It is unknown what charges the suspect will face once released from the care of the hospital.

Thompson said this isn’t the first time that he’s been the victim of an attempted burglary either. Apparently he walked into his home on another occasion to find a man trying to steal his television.

Officers don’t expect that Thompson will face any charges.

Thompson was reported to not even be shaken up following the incident, as he said he feels like he had done the right thing.