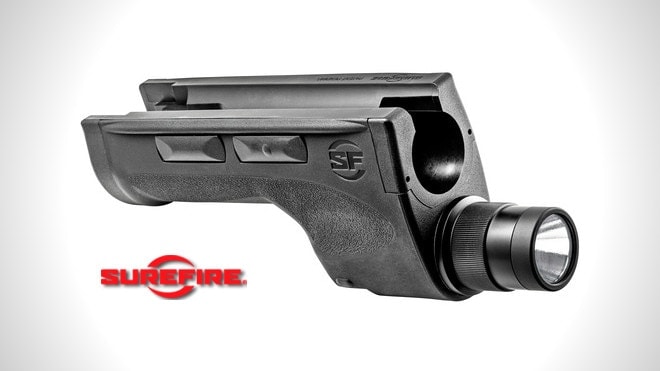 Introduced at SHOT Show earlier this year, SureFire’s new high-intensity shotgun forend weaponlights are now available for several models of popular shotguns. The new DSF-series forends have variable outputs up to an incredible 600 lumens. They also have 200-lumen and 50-lumen settings. These offer real performance improvements over the company’s earlier models.

Frankly, this new crop of high-power lights brings tactical lights into a new class of utilities; they’re so bright they can essentially temporarily blind a person under the right conditions, and have clear applications in all tactical roles, whether they’re military or law enforcement or self-defense.

In addition to constant-on, these forend lights can be momentarily activated for a brief burst of light. They have largely ambidextrous controls and the output level can be pre-set, and the switches can be disabled to prevent accidental activation during handling or transportation.

The design uses a polymer body over an alloy chassis for strength and weight management, although brightness at this level does bring the total mass of these forends in at about 20 ounces. Still, that is easily comparable to a railed forend, light and mount, and possibly lighter depending on the configuration. 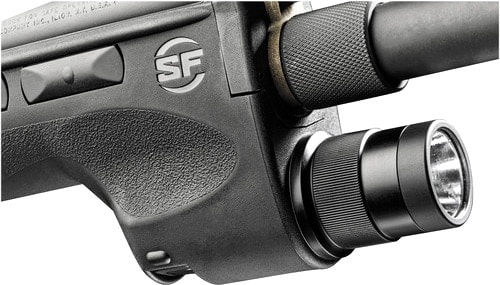 “The new Dedicated Shotgun Forend models are designed to replace the factory forends on the Remington 870, Mossberg 500/590, Winchester Defender 1300, SPX and Fabrique Nationale d’Herstal (FNH) P-12, Benelli M1 Super 90 and M2 models,” explains the SureFire press release. “No permanent modification to host weapon is necessary for installation, and all models seamlessly integrate into place of the factory forend.”

“All DSF models feature an ultra-high-output of 600 lumens on its high setting and 200 lumens on its lower setting. Additional features include a precision reflector, ambidextrous switching, and sleek high-impact polymer that is textured for a secure grip in any tactical situation.”

From the press release:

At the lowest output they have a constant-on runtime of 3 hours; battery life varies depending on usage.

The MSRP on these is $375 or $395 depending on the model, but they’re already being listed for sale for between $250 and $300. And of course with SureFire backing these, they’re pretty much guaranteed to be top-flight weaponlights. For more information on these, head over to the SureFire product page.