Pelosi on gun control: 'We don’t need a moment of silence, we need action' (VIDEO) 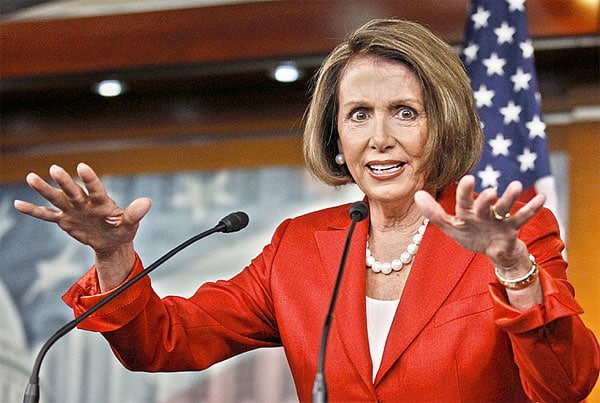 Predictably, in the wake of the mass shooting at a Navy Yard in Washington D.C. where 13 people were killed, including the shooter, Democrats in Congress are out publicly calling for new gun control legislation.

Leading the charge is House Minority Leader Nancy Pelosi (D-CA), who on Monday said that Congress should do more to honor the victims than have a moment of silence before a daily session.

On Thursday, Pelosi explained what she meant by “a day of action.”  That is, she wants both the House and Senate to vote on the same gun control bills the Senate failed to pass back in April: universal background checks, a ban on assault weapons and a ban on magazines that hold more than 10 rounds.

Pelosi specifically addressed the expanded background check bill sponsored by Sens. Joe Manchin (D-WV) and Pat Toomey (R-PA) in the aftermath of the mass shooting at Sandy Hook Elementary School in Newtown, Connecticut, which would have required background checks for gun purchases made at gun shows and over the Internet.

“I’d like the Senate to take another shot so that we can win on it,” said Pelosi, noting that she didn’t know “what changes they could make” to make it more politically palatable given how widely popular the bill allegedly is.

“What more, 90 percent of the American people support background checks. How come that’s not reflected in some way for this discrete bill to pass the Senate and the House?” she continued.

“We’re not giving up on this.  We’re not going away on it,” she said, adding that although the Manchin-Toomey bill failed to garner the 60 votes it needed to overcome a Republican-led filibuster in the Senate, it would somehow find the votes in the GOP-controlled House.

For Pelosi, Congress could “restore confidence in the safety of our neighborhoods, our schools, our communities by passing the background check legislation.”

Sen. Richard Blumenthal (D-CT) was also out crowing on Capitol Hill this week.  He told reporters that he hopes that this latest tragedy becomes a call to action for lawmakers who have been reluctant to embrace the pro-gun control campaign.

“My hope is this senseless killing will help us break through the gridlock that so obstructed us last time,” Blumenthal said Tuesday morning on MSNBC Live.

Blumenthal also said that because this latest shooting happened in the virtual backyard of Congress, less than two miles away, that it will provide further impetus for legislators to pass tougher restrictions on gun ownership that center around one’s mental health.

“Mental health has always been part of the comprehensive solution that I’ve advocated, and I hope we can regard this tragedy as a call to action near the nine-month anniversary of Sandy Hook,” said Blumenthal.

Lawmakers weren’t alone in their lobbying efforts in Washington.  They were joined by members of various gun control organizations, including New York City Mayor Michael Bloomberg’s Mayors Against Illegal Guns.

Carlos Soto, who lost his sister Vicki in the Sandy Hook shooting, told ABC News that he was not going to give up the fight for tougher gun laws.  He said that he doesn’t want other families to go through what he’s dealing with.

What are your thoughts? Will this latest shooting give pro-gun control politicians and advocates enough momentum to pass tougher federal gun laws, specifically an expanded background check bill?