“…[Starbucks is] not pro or anti-gun. However, we do believe that guns should not be part of the Starbucks experience. And as a result of making that final decision, we are respectfully requesting that those customers who are carrying a gun just honor that request and not bring a gun into Starbucks,” Schultz said. 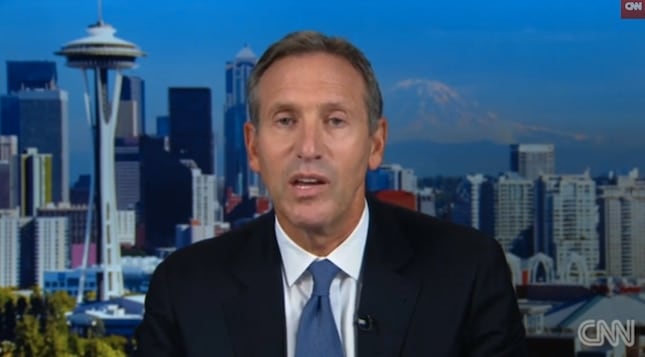 According to Schultz, this is not a ban and people who still wish to carry a gun into Starbucks will not be asked to leave and will still be served.

“Okay, so what happens if a number of them don’t respect your request? Does that mean you might move towards a ban?” Harlow asked.

“… I have no intention of moving beyond where we are today,” Schultz said.

Asking the question many gun owners are likely thinking, Harlow said, “I wonder about those people that really believe that they’re uncomfortable in your store without a gun, that carry a weapon to protect themselves, to protect others, and feel that you requesting that they don’t bring a gun in puts them in an uncomfortable position. What is your response to them?”

You can still bring your weapon into Starbucks, for now.

“… The majority, the vast majority of our customers will be much more comfortable, this is what they told us, if guns are not a part of the Starbucks experience,” Schultz answered.

Schultz realizes that whenever a company makes a decision on such a polarizing topic, that not everybody is going to be happy, but still believes it is the right call.

Moving on to the subject of lack of leadership in Washington and the blunder of debt sealing, Schultz said he feels at times that “America has lost its conscience” and that the role and responsibilities of companies is not just to make a profit, but “to serve their communities the best we can.”