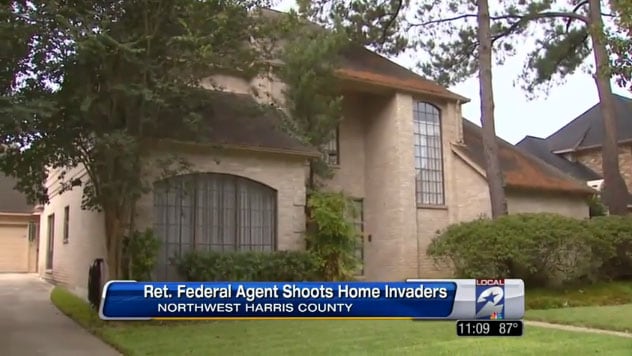 Even though the community is a peaceful one, neighbors said that they weren’t totally surprised to hear about the attempted robbery.

A group of three would-be robbers attempted to steal money from a man at his Ponderosa Forest, Texas home late Sunday night. Little did they know that the seemingly easy target was not only a retired federal agent, but also happened to be packing heat as well, according to local media.

The man was returning home with his family that night after having been at a funeral that day. Once the man pulled up into his driveway and the family started to get out of the car, the man was approached by three men, at least one of which was armed with a gun.

The men demanded money from the family, but instead of reaching for his wallet, the retired agent reached for his pistol.

“I was watching TV and I heard three gunshots — quick rapid gun shots — and that’s what made me get up and see what was going on. But at that point you just see a bunch of people standing outside,” one neighbor said.

The first shot came from the suspect’s gun, the other two from the man defending his family and himself. The two shots were enough to send the trio fleeing from the area.

Sometime later, a 19-year-old man showed up at a nearby hospital with two gunshot wounds: one to his leg and the other to his buttocks. Police were called in and it was there that the injured man was taken into custody for his part in the attempted robbery.

Police continue to question the man in an effort to find the other two suspects, who are currently still missing.

The injured suspect’s name has not been released.

And as for the retired agent’s neighbors? Although not happy about the robbery attempt, they are glad that the man handled it the way he did.

“You know most people don’t expect you to have a weapon to defend yourself as long as you have a concealed gun — gun license — well, that’s what we have,” said the same neighbor.

Police did not indicate whether any charges are expected to be filed against the former agent, although it’s highly unlikely, as the preliminary investigation shows that the man acted in self-defense.