In this mock scenario, these two “strangers” get a healthy does of canine teeth when a 5-year-old “little girl’s” attack dog protects to the bitter end.

“Hi little girl,” says a strange man with a baseball cap and a stick.

“What are you doing?” She asks confidently.

“Wanna come with us?”

“No,” she says without hesitation. 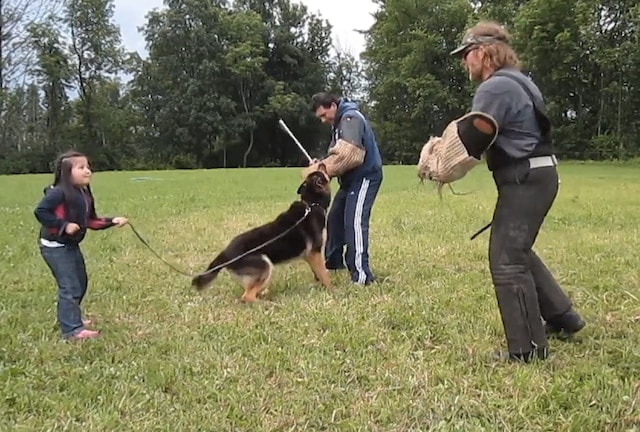 Pujo, the once docile pup, engages the baddies as they try to advance on the 5-year-old “little girl.”

The other “stranger” advances, and the once docile pup engages, launching into a teeth-baring attack as the dog latches onto the man’s arm.

The baseball cap wearing man steps forward and the dog switches targets, biting down on his arm.

Neither of the men are able to lay a single finger on the girl as the dog continues to defend, changing targets as appropriate.

“I surrender!” one man finally yells after the dog clamps down on his protective sleeve.

“Pujo, stay!” The girl commands of the dog. “Walk away,” she orders the men.

Children aren’t legally allowed to carry guns, but they certainly can walk a dog on a leash.