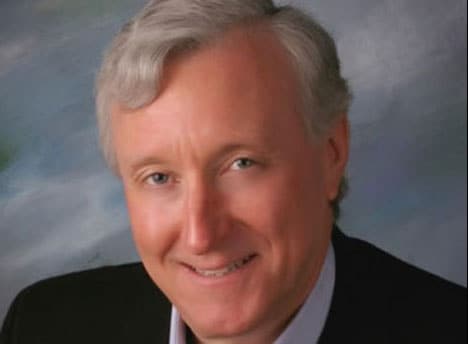 I’m always open to hearing the next great conspiracy theory, but this one lingers pretty close to the top of crazy ideas.

Apparently former New Hampshire State Sen. Jim Rubens, who recently announced his candidacy for U.S. Senate, wrote a blog post back in 2009 that has recently resurfaced to slap him right smack in the face.

According to the post, women in the workplace have, at least partially, contributed to the seemingly rise in mass shootings and other forms of extreme violence.

While he may have some valid points about the questionable breakdown of society over the last half century or so, he also makes some rather disturbing accusations and definitely risks his capacity to entice women voters with such statements.

Rubens explains how the increase of women in the workplace following World War II has led to the sexes competing for jobs and having a detrimental effect on men. So much so that the added stress has pushed some men to engage in extreme violence, even mass shootings.

“The collaborative, flexible, amorphously-hierarchical American economy is shutting out ordinary men who were once the nation’s breadwinners in living-wage labor and manufacturing jobs,” Rubens wrote. “Because status success is more vital to the male psychology, males are falling over the edge in increasing numbers.”

He continues by adding, “The collapsing number of male jobs in the increasingly female-centric economy just adds to the already harsher impact of OverSuccess on males,” in which he refers to his 2008 book where he explores America’s obsession with wealth, fame, power and perfection.

And while the American obsession for those things may very well hold true, that has little, if anything, to do with women in the workplace.

But yet in an interview with BuzzFeed on Wednesday, Rubens seemed somewhat surprised that anyone would have interest in the blog post that he wrote nearly five years ago, which was incidentally blocked for unauthorized users following the interview being published, but can still be read here.

“The point of this,” he explains in the interview. “If you read the whole thing, is that manufacturing jobs, which have been the basis for higher-wage working men during the post-World War II era have been in decline,” he said. “Men are more sensitive than women to external indicators of status, which is one of the points in my book … and it’s very important to all people, women and men, to have jobs, functions, and roles in life that are fulfilling and productive and engaging.”

Rubens blames “increased stress in males” on the loss of manufacturing jobs, which were historically predominately held by men, to “collaborative” jobs that now favor female workers, yet he offers no examples.

“It’s a tiny fraction of males that become stressed for whatever reason and engage in acts of extreme violence,” Rubens continued. “If you look through individual psychology of mass shooters over the past 10-20 years, you can see that in the profile. Often it’s a person who has been subjected to extreme stress in the form of social rejection, job loss and associated mental health issues.”

No disagreement there, yet that still has nothing to do with an increase of women in the workplace.

But then he wraps up the interview by saying that he supports women joining the workfoce and that is demonstrated by the fact that his wife is his business partner. 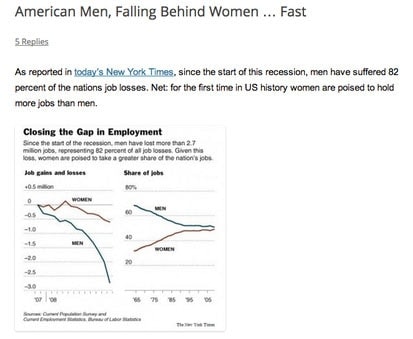 He also perpetuates the idea that in order to reduce extreme violence carried out by men, we need an increase in manufacturing jobs and that tweaking the tax code is one such way of doing this.

Clearly the issue of mass shootings is a complex one with no single solution. However, to insinuate that if women would just give these poor guys their jobs back, then the mass shootings and other forms of extreme violence would somehow magically go away, or even be reduced, is just another way of displacing blame somewhere other than where it’s due.

After all, the average man who suffers with inner turmoil due to hard times may turn to binge drinking. He may turn to drugs. He may become involved in an affair with a sleazy woman – or a not so sleazy woman – in an effort to feel better about himself. But average men who have fallen on hard times do not walk into a classroom full of first graders and start shooting. That is not normal and depicts a much greater problem in our society.

What are your thoughts? Do women ruin everything?