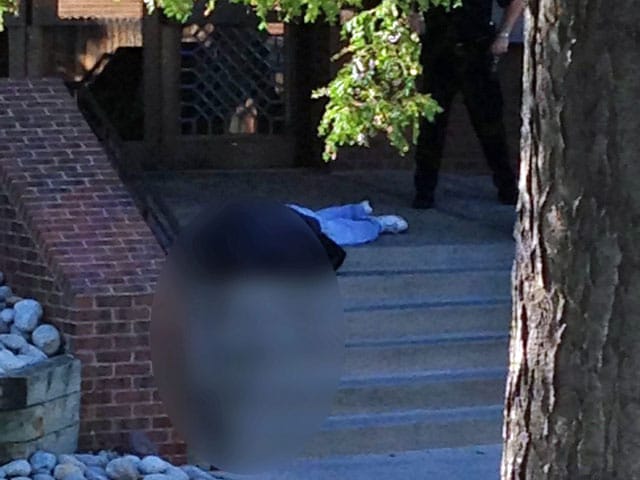 Before paramedics arrived, the suspect’s body could be seen near the entrance of the bank, his head covered with a coat. (Photo credit: The Denver Channel)

A man who robbed a bank in Denver was shot and killed Saturday morning after he pointed what appeared to be a gun at an off-duty police officer during his getaway.

According to a local report, the suspect, who has not yet been identified, walked into the bank and demanded money from a teller. After retrieving the cash, the man walked out of the bank and upon seeing the uniformed officer outside, pointed a weapon at him. The weapon was believed to be a gun, Denver police spokesman Sonny Jackson said. At 10:43 the officer shot and killed the suspect.

Another witness, Chris Higgens, who owns a nearby restaurant, told reporters that the suspect’s lifeless body could be seen at the top of the steps near the entrance, his head covered with a coat.

Within about a minute fire trucks and police cars surrounded the scene and moments later a stretcher was wheeling a body away, which was completely covered with a blanket.

Officers confirmed that the suspect was pronounced dead at the scene.

The parking lot was soon sectioned off with police tape as about a dozen cop cars and the department’s crime scene lab officials arrived. Officers were also seen going door to door talking with residents and possible witnesses. 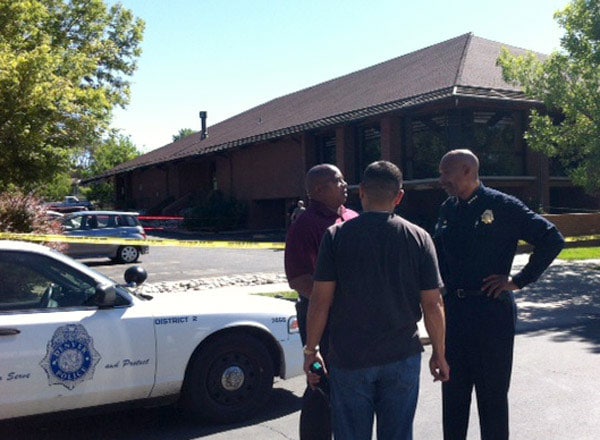 Officers stand outside of the bank Saturday morning as they piece together the details of the robbery and shooting. (Photo credit: The Denver Post)

Apparently the bank, which is located in a residential area, had been robbed several times in the past and recently hired off-duty police officers to stand guard outside near the entrance. This is a common occurrence and approved by the Denver Police Department which even allows the off-duty officers to wear their uniforms while standing guard.

The officer who shot the suspect has not been identified, but was placed on administrative leave while the investigation is underway, as is standard procedure.

Police did not confirm whether the suspect had a weapon or not.

No one else was injured during the incident.