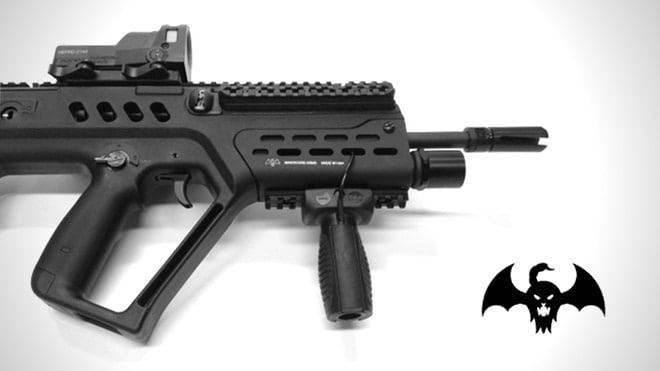 The Tavor is quickly becoming one of the most talked-about service rifle on the market today. A bullpup rifle made by IWI US, this compact rifle is chambered for 5.56 NATO cartridges and accepts standard AR/M16/STANAG magazines but is gas-piston operated.

However, compared to the enormous AR world, there’s practically no aftermarket for the Tavor. This is rapidly changing as the rifle grows in popularity, and Manticore Arms is one of the first companies to manufacture a custom handguard for it.

While there is at least one other option when it comes to adding a rail to the Tavor — the Zahal Tavor polymer Picatinny rail — Manticore takes things to a new level with their ARClight hanguard.

Short for Advanced Rail Chasis — lightweight, not only is it a hard-anodized aluminum handguard, it’s also modular. Extremely lightweight at just four ounces, the handguard can be modified with Manticore rail segments to accept rail-mounted accessories. On top of that, the handguard is compatible with Magpul rails and a wide selection of Impact Weapon Components Mount-n-Slot accessories, so users aren’t locked into just Manticore parts. However, Manticore Arms suggests using aluminum rails for lasers and other accessories that require sighting in; they don’t recommend using polymer rails for anything that must be zeroed in. 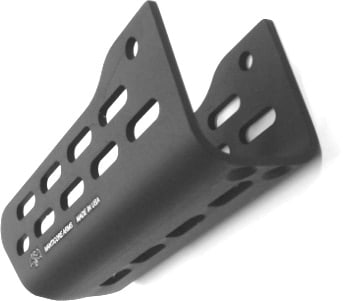 The ARClight 12-o’clock rail runs parallel to the bore of the Tavor, the angle for which most rifle accessories are designed for, not swept like the standard handguard. This allows it to be used for accessories like laser sights. However, Manticore Arms suggests using aluminum rails for lasers and other accessories that require sighting in; they don’t recommend using polymer rails for anything that must be zeroed in.

Taking advantage of the open space above the handguard is what makes the ARClight handguard most interesting: a weapon light mount. Inside the handguard there is enough room to add a remote-operated flashlight (not included), and there are of course many options when it comes to those.

Manticore is offering the ARClight in two versions, “Naked” and “Fully-Loaded.” The naked handguard is the chassis by itself, no accessories, just the nice, standard-angled handguard by itself. The fully-loaded package comes with all the accessories you need to trick out your Tavor, including a ring mount for one-inch diameter lights, one short 5-slot ARClight aluminum rail segment and one long 11-slot ARClight aluminum rail segment. The ARClight rail segments are lugged to fully engage the ARClight slots and use steel backer bares to lock down firmly. Additionally, the fully-loaded package includes wrenches and zip ties for cable management. 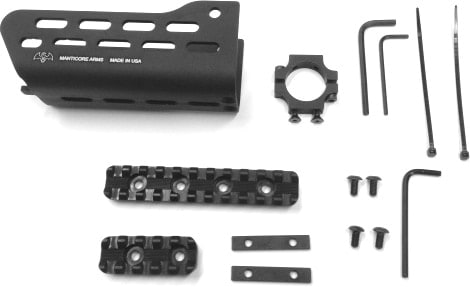 The ARClight is priced in-line with AR parts, with the naked rail running $165 and the fully-loaded package $225. Again, this doesn’t include a light. This is nice considering that the Tavor is a premium rifle and comes with a premium price tag.

Manticore Arms is planning a “Special-Edition” rail as well, details to be determined.

Right now these rails are available with just a plain matte-black-anodized finish, but Manticore will soon release handguards in flat dark earth to match FDE Tavor bullpups (or to give people the option of two-tone guns).

While the aftermarket for Tavors is still budding, this handguard just jumped to the front of the line when it comes to accessorizing the Tavor. For all the details and to order, head over to the ARClight product page.