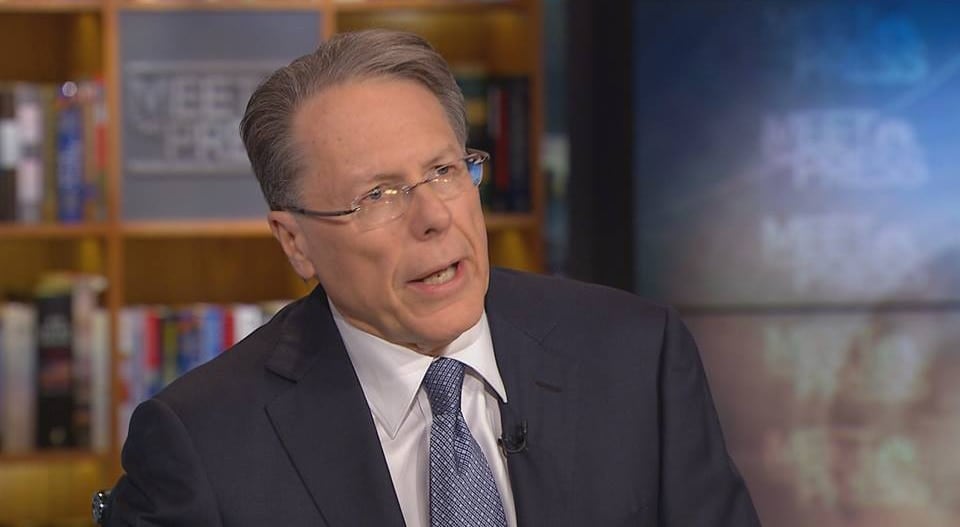 Wayne LaPierre has been with the NRA since 1977, the same year Fleetwood Mac won a grammy for “Rumours.”

On Sunday, National Rifle Association Executive Vice President Wayne LaPierre appeared on NBC’s “Meet the Press” to address the mass shooting at a Navy Yard in Washington D.C. and the subsequent calls for tougher gun laws.

LaPierre argued that employees who work at military facilities, including retired veterans, should be allowed to carry firearms because that is the most effective way to stop a crazed gunman.

“There weren’t enough good guys with guns.  When the good guys with guns got there, it stopped,” said LaPierre, echoing his remarks he made in the wake of the mass shooting in Sandy Hook Elementary School in Newtown, Connecticut, when the NRA chief called for armed guards in every school.

“We need to look at letting the men and women that know firearms and are trained in them, do what they do best, which is protect and survive,” he explained.

LaPierre dismissed calls for tougher gun laws and instead placed blame on the shooter, 34-year-old Aaron Alexis, and the broken system that failed to stop him.

“The outrage ought to be placed on an unprotected naval base, on a criminal justice system … that doesn’t even enforce the federal gun laws when we could dramatically cut violence, on a mental health system that is completely broken, on a check system that is a complete joke in terms of stopping the bad guys.

“Let’s do whatever we can, let’s fix the broken system right now,” he said.

Specifically, LaPierre wants the government to do a better job incarcerating those mentally ill individuals who attempt to purchase firearms. “They need to be committed is what they need to be, and if they’re committed, they’re not at the Navy Yard,” he said.

LaPierre also lamented the gaps that exist with respect to the National Instant Criminal Background Check System, the FBI’s database that gun shop owners use to check the criminal history of prospective gun buyers.  According to LaPierre, the system is broken because many states fail to turn over arrest records and mental health records to the federal government.

Moreover, even when those records are in the system, when a felon or a mentally ill person fails a background check when attempting to buy a gun, very rarely does the government charge that individual with a crime.  For instance, in 2010, there were 48,321 cases of illegal firearm purchases, only 44 were prosecuted by the federal government.

Similarly, an FBI report from 2009 showed a similar reluctance to go after individuals who lied on their federal background check application or NICS form. Of the 71,000 instances where people were caught lying, the Department of Justice prosecuted only 77 cases.

Alexis, who had told police that he was hearing voices and being chased by people who were using a “microwave machine” to send “vibrations into his body,” was never officially adjudicated mentally defective nor was he convicted of a felony.  So, regardless of the problems with the current system, it appears Alexis would have been able to purchase a firearm.

Perhaps this fact only undergirds LaPierre’s primary message, which is that “good guys with guns have the capacity to stop a bad guy with a gun,” a notion that many gun control advocates vehemently reject.

“More guns, that’s certainly not the answer,” Sandy Phillips, whose daughter was killed in the July 2012 movie-theater shooting in Aurora, Colorado, said on “Meet the Press.”

“More guns and more people that may be triggered by violence, or the predisposition to it, just muddies the issue,” she added.

Regardless of what system’s in place, lunatics and sociopaths are going to find a means to carry out their horrible deeds — whether it’s a gun or a pressure-cooker bomb or a truck filled with fertilizer.  The real question that we have to ask ourselves is whether we want to be armed or not when it goes down.  Most of us would probably agree that it’s better to be prepared.