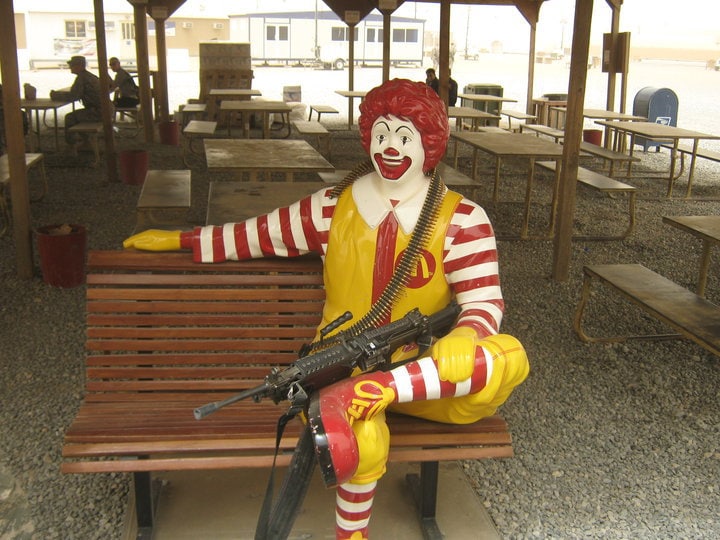 A McDonald’s employee at a location in the Philadelphia area.

After Starbucks issued a statement last week requesting patrons not to openly carry firearms into the cafés or outdoor seating areas, McDonald’s and Dunkin’ Donuts have followed suit and issued statements of their own on the controversial issue at the request of Business Insider.

Although it seems that McDonald’s and Dunkin’ Donuts both will – at least for now – remain neutral on the topic, both stating that they will simply abide by local, state and federal laws.

We recognize that there is a lot of emotion and passion surrounding the issue of firearms and open carry weapons laws.

While we respect the differing views of all our customers, McDonald’s company-owned restaurants follow local, state and federal laws as it relates to open carry weapons in our restaurants.

For franchisee-owned restaurants, operational decisions regarding open carry weapon laws are made by the independent franchisee.

That said, as with all aspects of operating a McDonald’s restaurant, we expect our franchisees and their crew to follow local, state and federal laws.

Dunkin’ Donuts and Baskin-Robbins restaurants are owned and operated by individual franchisees who are required to follow all federal, state and local laws with regard to firearms.

While prior to last week, Starbucks had a similar policy, CEO Howard Schultz has now made it crystal clear that not only do they no longer welcome guns in the coffee shops, but they do not wish to have the café’s used as a “political stage for media events.”

Schultz explained that the coffee giant and its employees “have been thrust unwillingly into the middle of this debate” and acknowledged that they no longer wished to have any part of it – from either side of the debate.

However, Shultz also reiterated that the policy was not an outright ban, but simply a polite request.

Nonetheless, many gun rights activists did not take kindly to the statement and vowed to purchase their java drinks elsewhere.

With their ever-growing coffee menus and neutral stances on gun control perhaps McDonald’s and Dunkin’ Donuts will entice ex-Starbucks patrons to frequent their establishments instead.

What’s your opinion? Do any of the companies’ statements have an affect on where you’ll grab your morning cup o’ joe?