Obama on gun control reform: 'It will happen' (VIDEO) 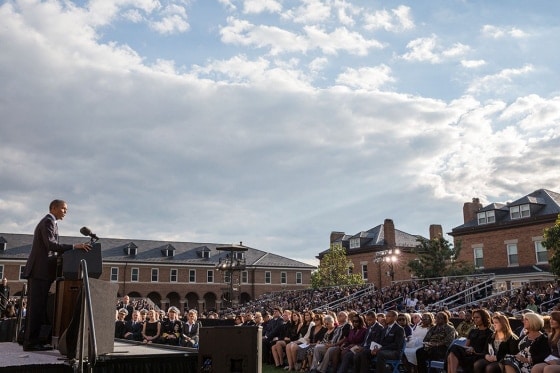 At a Sunday memorial service honoring the victims of the Navy Yard shooting in Washington, D.C. last Monday, in which 13 people were killed, including the shooter, President Obama adamantly declared that enactment of tougher federal gun laws is inevitable.

While calling for “common-sense” ways to reduce gun violence that strike a balance between gun rights and gun control Obama said, “It may not happen tomorrow and it may not happen this week, it may not happen next month, but it will happen because it is the change that we need. And it’s a change overwhelmingly supported by the majority of Americans.”

It’s not clear what specific legislative initiative the president was referring to, but one can probably infer that he was talking about the centerpiece of his gun control agenda: universal background checks.

Back in April, the Senate failed to pass an expanded background check bill sponsored by Sens. Joe Manchin (D-WV) and Pat Toomey (R-PA), which would have required criminal background checks for private sales and transfers made at gun shows and over the Internet.  The bill fell six votes shy of the 60-vote threshold needed to overcome a GOP-led filibuster.

The Senate also voted down bills that would have renewed the federal ban on so-called assault weapons and a ban on magazines that hold more than 10 rounds.

Though, one can argue that none of these “legislative solutions” would have stopped 34-year-old Aaron Alexis from launching his attack on the Naval Sea Systems Command Headquarters a week ago.  Alexis was mentally disturbed, there’s no doubt about that, but he had never been involuntarily committed or adjudicated “mentally defective.”  Moreover, he had brushes with the law, but was never convicted of a felony.

Therefore, when Alexis went to purchase the shotgun — not an “assault weapon” or “AR-15,” as many media outlets reported — he used in the attack, he passed both a state and federal background check.

Nevertheless and despite this inconvenient truth, the president said that mass shootings of this sort should be a call to action that should lead to a transformation that mirrors the changes the United Kingdom and Australia underwent in the wake of several high-profile murders and mass shootings.  Both countries placed heavy restrictions on firearms to the extent where it’s almost a de facto ban on gun ownership.

The two countries “understood that there was nothing ordinary about this kind of carnage. They endured great heartbreak, but they also mobilized and they changed. And mass shootings became a great rarity,” explained Obama.

However, in America, “after all the speeches and all the punditry and all the commentary, nothing happens. Alongside the anguish of these American families, alongside the accumulated outrage so many of us feel, sometimes I fear there’s a creeping resignation, that these tragedies are just somehow the way it is.”

“What is different in America is that it’s easy to get your hands on a gun,” Obama said, instead, “and a lot of us know this.”

Do you agree with the president?  Are tougher gun laws inevitable?  Should we be more like Europe?  Is it too easy for one to obtain a gun in the U.S.?