A small group of protestors at Appleton, Wisconsin’s Farmers Market protested open carry laws by using live chickens. But when Mark Scheffler was asked to leave the gun protest, along with his brown hen named Winchester, he felt like his point had been made.

According to Scheffler, chickens are far safer than firearms, and the law needs to reflect that. 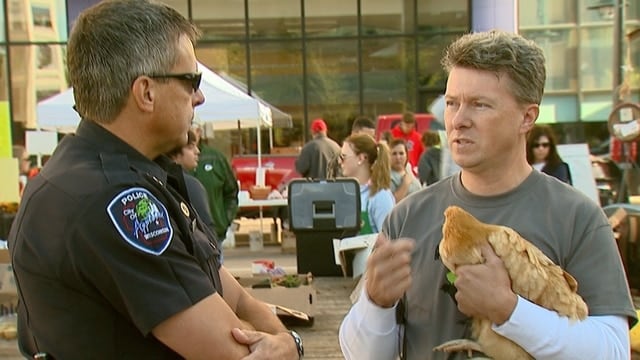 Scheffler played chicken with a cop, blatantly open carrying his loaded poultry right in front of him.

While Scheffler owns and uses guns, he doesn’t think they have a place in a public setting.

“I am a hunter. I am a gun owner, and I think the weapons should have limitations,” Scheffler commented.

Deputy Police Chief Todd Olm asked Schoeffler to leave after explaining a city ordinance that prohibits animals at events. No citation was issued on Saturday, but Schoeffler anticipates receiving one, saying the amount will be “chicken feed” in comparison to the awareness he generated.

This poultry act comes two weeks after Appleton’s farm market was forced into the national Second Amendment debate. Charles Branstrom and Ross Bauman walked down the street with AR-15 rifles slung across their back and pistols on their hips. 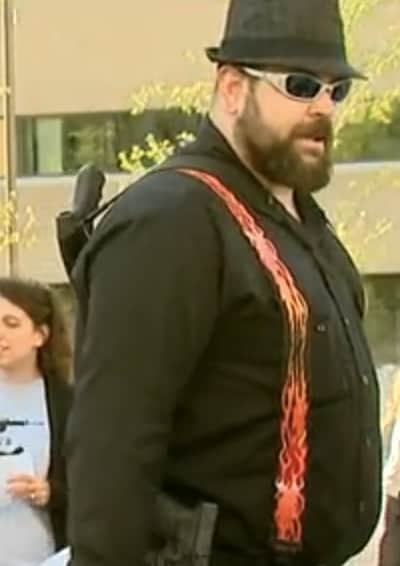 Others carried pistols, rifles and shotguns at the protest.

Police responded after receiving several 9-1-1 calls on September 7, drawing down on the men and detaining them in handcuffs. After checking identification and determining their intentions, officers released Branstrom and Bauman were without a fine, though many have claimed their constitutional rights had been violated.

Bill Polster of Sheboygan Falls, Wisconsin, displayed his disagreement with the protestors by showing up to the market with a holstered Glock 21 pistol and Mossberg 500 shotgun slung over his back.

“We have a right to keep and bear arms,” Polster said.

Police Chief Olm understands some people don’t like seeing firearms in public, but since open carry is legal, police can only observe behaviors and work towards ensuring those carrying don’t have malicious intentions.

“In law enforcement, we have to deal with what’s legal and what’s illegal,” Olm said.