After being suspended for shooting an airsoft gun on his front lawn, a Virginia Beach student is waiting to find out whether he will be expelled for violating his school’s “zero tolerance” policy with respect to firearms, according to an exclusive report by the local news station WAVY. 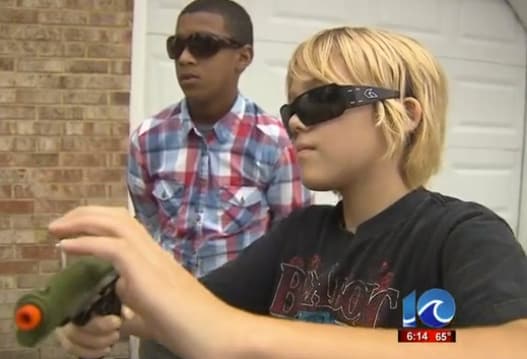 Khalid Caraballo, left, and his neighbor were shooting the airsoft gun in the yard, about 70 yards away from the bus stop. (Photo credit: WAVY)

Thirteen-year-old Khalid Caraballo was playing with his friends before school.  According to his version of the story, they were shooting each other with airsoft guns on his parent’s property.  They were not yet at the bus stop.

While they were playing, a neighbor noticed the airsoft gun, which shoots non-lethal plastic pellets, and called 911.  She knew the gun wasn’t real but was worried about it anyway.

“He is pointing the gun, and it looks like there’s a target in a tree in his front yard,” the woman told the dispatcher.

In a phone conversation with WAVY, the woman confirmed that the boy was using the airsoft gun for “zombie” target practice and that there was a net behind a zombie target that was used to catch the plastic pellets.  The woman’s son was also there playing with Khalid and his friend Aiden, who was also suspended from school.

In total, six kids were playing on that infamous day.  The three shooters were suspended, Khalid, Aiden and another boy.  The three other kids, who apparently did not have a chance to shoot the airsoft gun, were not suspended.

Aidan told WAVY that he shot the caller’s son in the arm, and Khalid admitted to shooting another friend in the back.

“He knew we had the airsoft gun.  He knew we were playing.  He knew people were getting shot.  We were shooting at the tree, but he still came and even after he was shot he still played,” referring to the son of the 911 caller.

Though, according Larkspur Middle School Principal Matthew Delaney the boys were “firing pellet guns at each other, and at people near the bus stop” and one child “was only 10 feet from the bus stop, and ran from the shots being fired, but was still hit.”

Consequently, Delaney said that those who’ve been suspended could be expelled for one year for breaking the school’s “zero tolerance” policy with respect to firearms of any sort.   But the parents of Khalid and Aiden insist that the play took place on private property and not near a school zone. 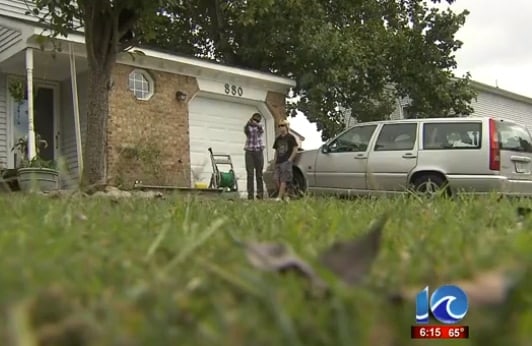 According to the Virginia Beach City Code, no person shall discharge any firearm, spring-propelled rifle or pistol, within 150 yards of any building. Then it reads “no person shall use a pneumatic gun except at approved shooting ranges or within private property.”

Khalid’s mother, Solangel Caraballo, who is taking her son’s side in this even though she scolded him for playing without her permission, argued that her son should not be facing such a severe punishment because he was on her property which is located approximately 70 yards from the bus stop.

“My son is my private property.  He does not become the school’s property until he goes to the bus stop, gets on the bus, and goes to school,” she said.

Virginia Beach Police have said that they are not going to press charges and that they don’t enforce the codes with respect to airsoft guns unless “the juveniles are not exercising reasonable care.”  Reasonable care is defined as “the gun is discharged in a manner so the projectile is contained on the property by a fence or backstop,” as WAVY reported.

While the police have backed off from the incident, the school has not.  And now Khalid must wait while school administrators decide his fate.

“It’s terrible. I won’t get the chance to go to a good college,” lamented Khalid, who swore he’d never do it again.  “It’s on your school record. The school said I had possession of a firearm. They aren’t going to ask me any questions. They are going to think it was a real gun, and I was trying to hurt someone.  They will say ‘oh, we can’t accept you.’ “