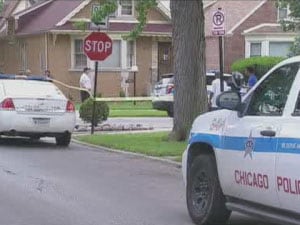 Chicago Mayor Rahm Emanuel says that the increase in patrols is helping to reduce violence in the city. (Photo credit: CBS)

Illinois Gov. Pat Quinn told reporters on Saturday that if the city officials wanted the extra help, he would consider the use of state resources, including state police and the National Guard, to help curb the violence in the streets of Chicago, reports a local CBS affiliate.

However, Chicago Police Supt. Garry McCarthy says extra help is not what’s needed, but rather tougher gun laws and enforcing those laws already on the books.

The statement came after the FBI declared last week that Chicago is now the murder capital of the U.S. and another violent shooting late Thursday night at a basketball game at Cornell Square Park, which left 13 people suffering from gunshot wounds, including the youngest victim of only 3-years-old.

And while Quinn admitted that he had not yet discussed the matter with either Chicago Mayor Rahm Emanuel or McCarthy, saying that they neither asked for the help and he hasn’t offered it. However, Quinn noted that in similar violence-ridden East St. Louis state police had been brought in to help local authorities.

“It has to be done in a coordinated fashion with the local law enforcement, with their full cooperation,” Quinn said.

And this isn’t the first time that the idea of calling in troops has been brought up either. Back in 2008 then-Gov. Rod Blagojevich made a suggestion to reduce the “out of control” violence in Chicago with the aid of either the state police or the National Guard. However, some took the suggestion as a jab at then-Mayor Richard Daley.

Nonetheless, Quinn also said that he is still dedicated to taking action against assault rifles and high-capacity magazines, which were believed to be used in Thursday night’s attack.

“I think anyone who saw what happened in Cornell Park the other night was horrified by the violence,” Quinn said. “I live on the West Side of Chicago. It is an area that has been inflicted with violence, and we’ve got to protect the people.”

But McCarthy said at a graduation of 125 new Chicago PD officers that he does not agree troops should be brought in.

“It’s not an issue of resources. It’s the issue of supporting that system. If people don’t go to jail for possession of a firearm, they don’t learn not to carry a firearm,” he said.

The attack occurred in an area that city officials refer to as a “high gang-conflict zone.” The park is located in between two areas, known as “special impact zones,” where officers have flooded the streets with extra patrols.

While Emanuel also admitted that he has become frustrated with the increasing gang violence he also feels that his violence-reduction strategy is working.

“We will not allow children in the city of Chicago to have their youthfulness, their optimism, their hope taken from them,” Emanuel said.

Incidentally, the number of homicides in the city has decreased 23 percent compared with this time last year, but Emanuel said that the statistics are often overpowered by the pictures seen when the violence does occur.