Russia sells nearly half of the Kalashnikov Concern to private investors 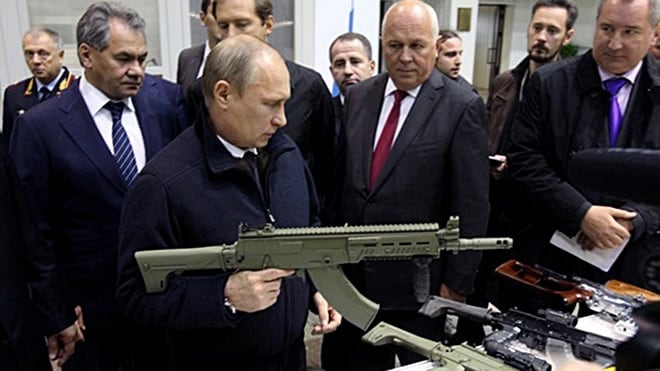 The Kontsern Kalashnikov, or Kalashnikov Concern, is currently being partially transferred to two wealthy Russian businessmen. They’re selling a large stake of the company, 49 percent, to allay some of the costs of rebuilding the Izhevsk Machinebuilding Plant (Izhmash), the original manufacturer of the world-renown AK family of rifles.

In April of 2012, Izhmash was declared bankrupt by the state after undergoing almost a year of court-appointed bankruptcy arbitration. It was then that the company was taken over by a state-run holding corporation, Russian Technologies (Rostec), which was formed in 2007 by Russian President Vladimir Putin, expressly to revitalize the Russian arms industry.

“These funds will be used, among other things, to pay off debt as well as to pay the corporation’s loans,” according to a Rostec statement.

“Izhmash had an opaque and cumbersome management system: It consisted of 32 legal entities, some of which were in offshore jurisdictions. It relied on illegal methods for withdrawing funds. The company was on the verge of bankruptcy,” added Rostec.

Just recently, Izhmash merged with the Izhevsk Mechanical Plant (Izhmekh), another arms firm that manufactures Baikal and Makarov firearms and Koshkina, a cartridge and tooling manufacturer. This new company was dubbed the Kalashnikov Concern after Russian hero and inventor of the AK-47, Mikhail Kalashnikov.

The new Kalashnikov brand is part of a multi-tiered effort to bring new business to these hulking manufacturers.

The two investors who bought the minority share of Kalashnikov are Andrei Bokarev, a Siberian coal mine operator, and Aleksei Krivoruchko, a railroad owner.

Their share of Kalashnikov was purchased for 2.5 billion rubles ($78.4 million).

While Izhmash’s sales have been increasing over the years, the plant was designed to manufacture small arms in tremendous quantities, in numbers that the current market can’t absorb. After many years of insufficient military contracts, Izhmash began operating at a loss.

Their commercial sales — especially to Americans who can’t get enough of their globally-proven rifles — simply weren’t enough to support the company.

However, new designs from the company — specifically the AK-12, the successor to the AK family of firearms — promise renewed interest in Russian small arms.

The AK-12 was developed nearly from the ground-up to replace AK-series rifles in use by the Russian military, particularly their special forces. The company has plans to introduce many new firearms, both new and modernized or reinvented older designs, in the coming months, to the international markets.

The company expects to triple to quadruple their sales by 2020.