Remington 2020: Smart scopes for the masses 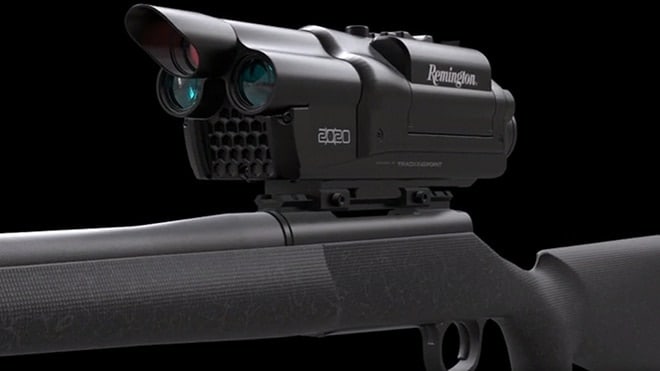 With the help of TrackingPoint, which is without a doubt the leader in smart scope technology today, Remington is launching a new line of smart rifle and scope combinations that are a little more in-line with the traditional world of shooting.

Remington 2020 uses technology similar to what’s used in the TrackingPoint rifles save for one major difference: unlike TrackingPoints guns, which have an electronic trigger that can be set not to fire unless the rifle is aimed perfectly, 2020 guns have conventional triggers and the smart scope uses a visual cue to let the shooter know when they are on-target, and the shooter decides when to pull the trigger. They still do all the ballistics calculations, range-finding and target tracking.

In other ways, the system appears to be built towards more typical shooters as well. Remington’s 2020 riflescopes only predict shots out to 500 yards and use shorter-range cartridges: .30-06 Springfield, .308 Winchester and .223 Remington.

Compared to TrackingPoint’s rifles, which are chambered for .338 Lapua Magnum and .300 Winchester Magnum and can calculate ballistics in the 1,000-yard range, Remington’s smart guns are far less exotic and far more approachable, which is no doubt the point of their joint venture.

But apart from being a somewhat simpler, shorter-range version of the TrackingPoint system, the Remington 2020 is practically identical to the arch-smart scope in most other ways. 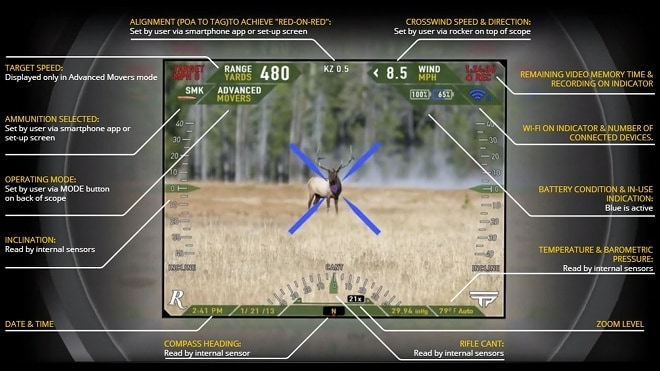 The Remington 2020 combines a magnified optic and a digital imaging system to paint and track targets, and it uses its internal and external sensors to track bullet drop, wind drift, wind resistance and air pressure (with thermal and barometric sensors), incline, decline and cant. It even compensates for the Coriolis effect.

Like the bigger version of the smart scope, the Remington 2020 knows if you’re on-target and holding the rifle steady for the shot. It simply tells you when to take the shot instead of automatically firing when everything is lined up perfectly.

As is the case with TrackingPoint, Remington’s 2020 pipes the optical image directly to an image analyzer. What the user looks at is a small LCD heads up display. With this system it’s possible to add an overlay to the video feed with all the information the shooter could want, including much of the sensor data, battery level, zoom level, compass heading, even the date and time. Although it would be a bit awkward to check your scope for the time.

Using the app, a shooter or spotter can easily make adjustments to the scope settings as well, including setting a “kill zone” or acceptable deviation in MOA from the center of the tag. The app also can be used to control the video recorder.

Hardware-wise, the Remington 2020 rifles are more or less off the shelf. Remington has three different 2020 rifles, one for each cartridge:

All Remington 2020 rifles come with 3-21x optics as a part of their smart scope package, which most would agree is more than enough for shooting out to 500 yards.

In order to be able to calculate the correct holdover precisely, these rifles have been tuned to work with a small selection of Remington and Barnes loads. While they will certainly fire all compatible ammunition, they will not be as accurate with ammo they’re not programmed to use. Still, they are programmed to use similarly off-the-shelf ammo already in production, not custom 2020-specific loads.

While Remington clearly intends to offer these as packages, we do not yet know if they will sell the scopes separately to people who already own the host rifles. For that matter, we don’t know what the going rate for one of these packages is. Hopefully they’ll be a lot less than TrackingPoint systems, which run upwards of $25,000.

That being said, these aren’t built on custom Surgeon rifles, either. The design is clearly intended for mainstream gun owners, not exotic big-game hunters.

As long as these cost less, which they undoubtedly will, the Remington 2020 rifles show that smart scope tech is rapidly becoming just scope tech, and that down the road, the option to include a ballistics calculator and target tracker with an optic may be simply a decision of whether to add or cut battery weight.

For all the product details, head over to the Remington 2020 website.