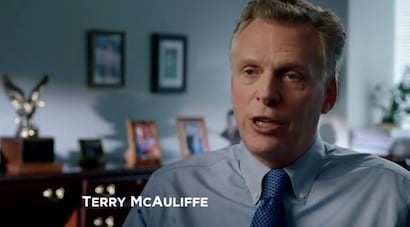 A few weeks ago, Virginia gubernatorial candidate Terry McAuliffe, a Democrat, was asked directly if he supported an assault weapons ban.

He dithered, telling reporters from Breitbart that he supported universal background checks.

“I think that anyone that purchases a gun should have a background check. I’ve gone through it myself. It’s a very simple process. It only takes a couple of minutes to do it,” McAuliffe said.

“What I have always said is as governor, what I would like to get done is to have background checks. That would be my first important step in that process,” he said.

This question put him on the hot seat because in the past, following the mass shooting at Sandy Hook Elementary School in Newtown, Connecticut, he released a statement saying that he did support an AWB.

“I’ve said in the past and I continue to believe that there are mainstream restrictions on dangerous weapons that we can agree on including: renewal of the Assault Weapons Ban, passage of bipartisan legislation to strengthen background checks, and re-implementation of Virginia’s one-gun-a-month rule.”

So, as a candidate for governor, does he still support an AWB?

Well, on Monday, his website was updated to include a section that reads “Support Common Sense Gun Control Measures.”  It reads:

As Governor, Terry will support mainstream and majority supported gun control measures like universal background checks, limiting the size of magazines, and a return to the 1-gun-per-month rule. These measures respect Virginians’ right to bear arms while reducing gun violence.

It appears his handlers and political advisors got together and decided that supporting an AWB would be toxic to the campaign.  So, instead, they opted for the “Colorado compromise,” as some journalists have been dubbing it.  That is because with the exception of the one-gun-per-month rule, Colorado passed the same gun control laws following Newtown.

In short, McAuliffe and his staff have done the political calculations and determined that they can’t go whole hog on gun control, like the governors in New York, Connecticut and Maryland have done in recent months.

Though, if elected to office, who knows what McAuliffe will try and ram through the Legislature.  Also, it would be interesting to see how many Virginia state lawmakers would get behind his gun-control platform given that two Colorado lawmakers lost their seats in recall elections for voting for UBCs and bans on magazines that hold more than 15 rounds earlier this month.  Probably not many.

Bottom line: McAuliffe is a pro-gun control politician that hasn’t been completely upfront about his gun control agenda.  If elected, one can reasonably assume he’ll do whatever he can to push through laws that infringe upon the rights of law-abiding gun owners.