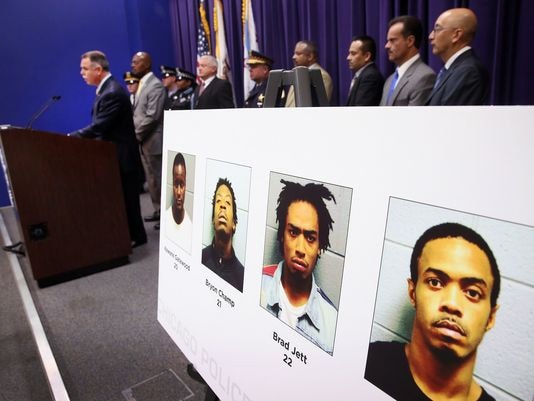 Chicago Police Superintendent address the media about the four men connected to the gang related shooting in which 13 people were shot.

On the heels of a gang-related shooting that left 13 people wounded, including a 3-year-old boy who was shot in the face, Chicago Mayor Rahm Emanuel and Police Superintendent Garry McCarthy are calling on state lawmakers to pass a three-year mandatory minimum prison sentence for individuals caught illegally carrying a firearm.

“They dealt last year under court order with concealed carry,” continued the mayor, referencing the state’s new ‘shall-issue’ concealed carry law.  “This year, put a three year minimum for any gun felony so you’re not becoming a repeat offender on the streets of Chicago.”

Last week, four men were arrested in connection with the aforementioned drive-by shooting at Cornell Square Park on the city’s southwest side.  Authorities are charging the four men with attempted murder and aggravated battery with a firearm, USA Today reported.

Police believe that the drive-by was gang retaliation as one of the suspects, Bryon Champ, 21, was shot earlier in the day.

Police said that Champ was previously arrested in 2012 for aggravated unlawful use of a weapon and in 2011 for receiving stolen property.  He was convicted of both crimes.  He was put on probation for the first offense and was sent to Cook County Jail “boot camp” for the gun charge.

All but one of the men involved in the park shooting have criminal records.

Tabari Young, 22, was arrested at least a dozen times.  Police believe he was the one, along with Champ, who fired the rifle.

Brad Jett, 22, who was the lookout man during the incident, is a convicted felon.

Kewane Gatewood, 20, the youngest suspect, who obtained the gun used in the shooting, did not appear to have an arrest record.

Given the fact that the majority of these men are repeat offenders, with known ties to gangs, McCarthy expressed his outrage with the situation.

“Not only do we believe a military-grade weapon was used in this shooting, but one of the offenders charged last night was convicted of Aggravated Unlawful Use of a Weapon/Possession of a firearm by a felon a little more than a year ago,” McCarthy said.

“He received boot camp for that gun crime and was back out on the streets to be a part of this senseless shooting. That is unacceptable. To truly address violence for the long-term we need state and federal laws that keep illegal guns out of our communities and provide real punishment for the criminals who use them,” he added.

McCarthy also speculated as to what could have been had Champ been behind bars instead of out on the street.

“If Bryon Champ is not on the street — as he shouldn’t have been — this incident likely does not occur,” McCarthy said Tuesday, according to the Chicago-Sun Times.

Meanwhile, Emanuel is pushing the state legislature to act as quickly as it can to pass the three-year mandatory minimum sentence.  Thus far, he said he’s spoken with all four legislative leaders but there’s no indication as to how eager they are to pursue the measure.

“The big problem as it relates to toughening up our gun laws is a constant where the event occurs like a Hadiya Pendleton or what happened at Cornell Park and, by the time legislators pay attention, it’s a distant memory,” the mayor said.

“I want Springfield to have the same sense of urgency that the people of Chicago [whom] they represent have [so] we don’t have another incident where somebody with a prior criminal background with a gun record is back on the streets of Chicago in nine months rather than behind bars for three years minimum. … Finally use this to change the laws. Stop allowing excuses,” Emanuel said.

Since the law has yet to be drafted or sponsored by state lawmakers, it’s unclear as to how it would potentially effect a law-abiding citizen with no criminal history.  So, for example, if an out-of-state visitor were to accidentally bring a firearm into the city limits, would he or she be subject to a three-year mandatory minimum sentence?

We’ll have to wait and see what the bill looks like if/when it is introduced.