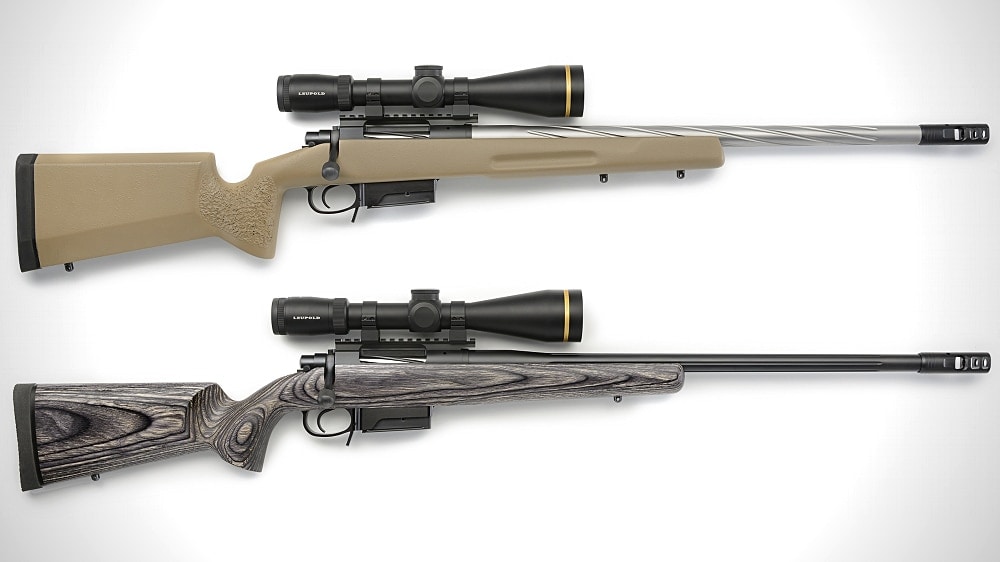 Colt, in cooperation with Cooper Firearms of Montana, is adding two new models to the M2012 bolt action rifle family; one tactical and one traditional. While they’re not technically custom rifles, they are the next best thing for big-bore precision.

“The durability and accuracy provided by the M2012 bolt action rifle family is outstanding,” said Joyce Rubino, Colt vice president of marketing. “These new ‘crossover’ rifles transition easily from target shooting at the range to long-range hunting in the field.”

The first model is the M2012MT308T (top), a .308 Winchester rifle with a tactical Manners composite stock. The stock integrates a more vertical pistol grip than standard straight stocks. Manners uses layers of fiberglass and carbon fiber for the stock, ensuring that it will take abuse and not be worse for wear. Composite stocks are also more stable through temperature and humidity changes, and they are lighter, too. The stock is fit with two forward sling swivel attachments, one for a sling and the other for a bipod.

While it may not have the catchiest name, the M2012MT308T makes up for it with class. It comes with a custom spiral-fluted 22-inch match-grade 1-in-10 stainless steel barrel and adjustable single-stage Timney trigger. Dry, the M2012MT308T weighs in at 10.25 pounds and measures in at 44 inches long overall.

The second rifle comes in two versions, the M2012LT308G and the M2012LT260G. Deciphering their model names, one is chambered for .308 Winchester and the for .260 Remington. Other than that, they are identical.

Both the M2012LT308G and 260G are designed for the more traditional hunter, although they won’t slouch at the target range. The also sport match grade, fluted barrels. The fluting is straight and the barrel has a matte black finish. The rifles are fit with custom gray laminated hardwood stocks that look pretty handsome while remaining lightweight. Like the M2012MT308T, the M2012LT308G and 260G have adjustable Timney triggers and 22-inch match-grade barrels, in this case chrome-moly steel, with a 1-in-10 twist (.308) and 1-in-8 twist (.260). Both weigh in at 8.5 pounds without the magazine and also measure in at 44 inches in overall length.

After each rifle is made, they are of course test-fired. Each rifle ships with its test target, which is serialized and signed.

These high-end rifles do command a price premium; the tactical M2012MT308T has a suggested price of $3,195 while the M2012LT308G and 260G, with their lighter profile and composite stock, run a little less at $2,795. These are MSRPs; street pricing should be several hundred dollars less.

The new additions to the M2012 lineup are all substantially more affordable than the original.

The first rifle in the M2012 bolt action rifle in the Colt catalog would be the M2012SA308. Likewise chambered for .308 Winchester, it was designed for the precision marksman. It is build on a solid aluminum chassis that houses a custom fluted, match grade 22-inch stainless steel barrel. Naturally it also comes with a custom trigger and like the new guns measures in at 44 inches overall. The new models shave off a couple pounds compared to the 13.2-pound M2012SA308. The M2012SA308 has a sticker of $3,795, considerably more than the new M2012MT308T and M2012LT308G/M2012LT260G.