The Guns of 'Breaking Bad'

The final episode of AMC’s Breaking Bad airs this Sunday and the Guns.com staff is eagerly anticipating a just and Scarface-esque finale to this epic piece of moral madness.

We know it’s not your classic Western (yet), but this grand homage to nerd rage won our hearts and minds back in 2008 with a bag full of mercury fulminate and we’ve been hooked on the blue stuff ever since… and as you already know, we always keep an eye out for drool worthy hardware. So, let’s cook:

SPOILER ALERT:  If you’re currently watching the series, perhaps planning riding out the marathon currently going on AMC with all 64 episodes in order, realize this article is basically one big spoiler.  So, please bookmark it and read it afterwards. 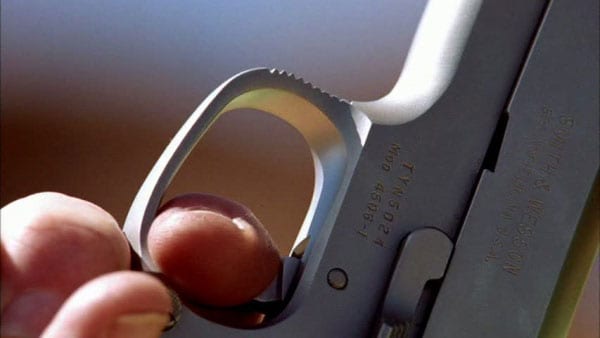 Just in case you were questing on model Smith & Wesson…

In the beginning of the series, gun violence is the reality “Mr. White” (Bryan Cranston) and Jesse Pinkman (Aaron Paul) are trying to avoid as they dip their big toes into the meth business.

But their naivety gets shattered in the pilot episode when a drug dealing vato calling himself Krazy-8 uses a Smith & Wesson 4506 to put some new air vents in their mobile drug lab a.k.a. the Crystal ship.

Walt “inherits” this piece and not long after Jesse gets rid of it, marking the first time the duo disposes of an illegal gun.  It would not be the last. 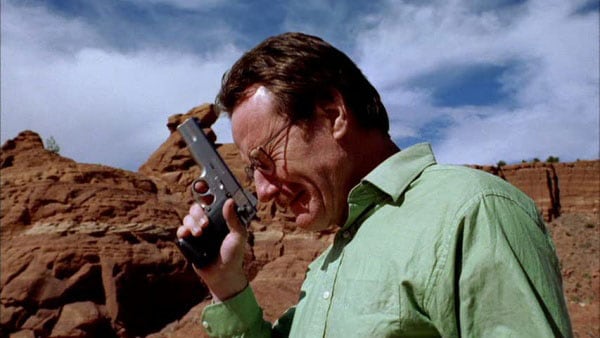 Walt gets all weepy in season one over a Smith & Wesson 4506. 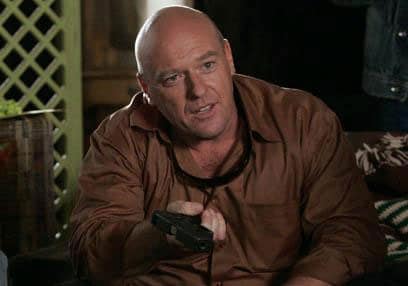 Hank showing off his Glock 22.

When we first met ASAC Hank Schrader (Dean Norris), it was easy to write him off as just a stereotypical cop. He was a little brash, a little self-righteous, a touch arrogant and definitely tenacious.

Over the series this nuanced character turned into one of our favorites precisely because he underlines the fact that the job of catching monsters may well demand all the above mentioned traits.

In the pilot episode Hank introduces Walt Jr. (and us) to his DEA issue Glock 22, which can be seen throughout seasons two, three and five. With an audience around him, it’s almost as if Hank can’t help himself from getting into the power of the .40-caliber round over the 9x19mm (claiming he has seen the round ricochet off a car windshield)—and leading us to believe ABQ’s finest are also Guns.com readers. 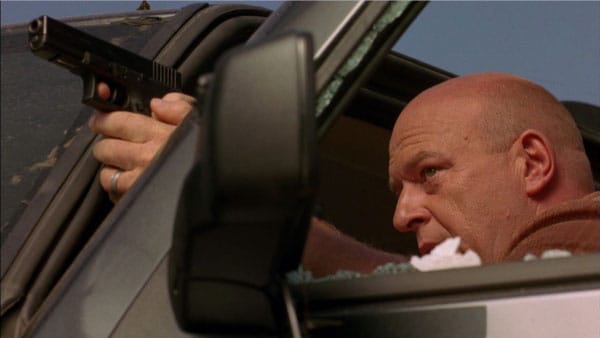 It’s fitting our series introduction to select fire weapons comes to us in the hands of Tuco Salamanca, himself a chemical fueled machine caught somewhere between wild and brutally efficient. 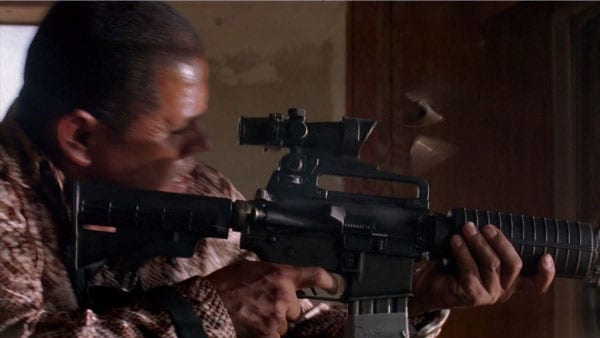 Tuco puts a bead on the demons in his head through an ACOG scope.

Tuco uses a M4A1 Carbine (sometimes with an ACOG scope) in the second episode of the second season, when he takes Walt and Jesse hostage. He later uses a couple three round bursts to ward off the speed demons in his head, all while making a complete, albeit uncomfortable lunch for his uncle and captives.

Walt gets his hands on the rifle after Jesse introduces Tuco’s head to a rock (the first time we see Jesse isn’t just good for taking punches).

Jesse also gets his hands on Tuco’s two-toned Jericho 941 R during this scuffle, which is just too good looking for us to call it a ‘pimp gun’. 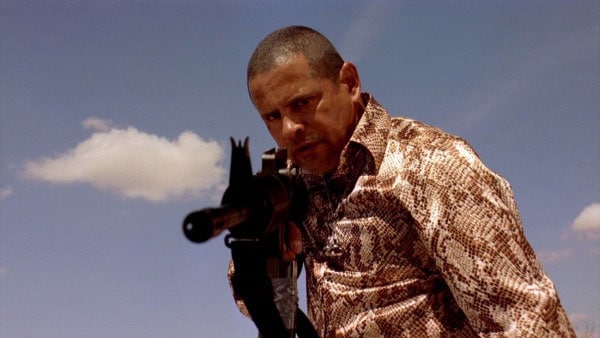 M4s pop up occasionally throughout the series, usually in the hands of good guys (i.e. law enforcement) though not always.

When running his model, clandestine drug empire, Gustavo “Gus” Fring  (Giancarlo Esposito) tended to avoid all out gun battles in favor of box cutters and a god-like tactical advantage, but in the drug trade that’s like saying you prefer not to get into traffic accidents.

Stay on the road long enough, and eventually you’re going to get hit with metal. 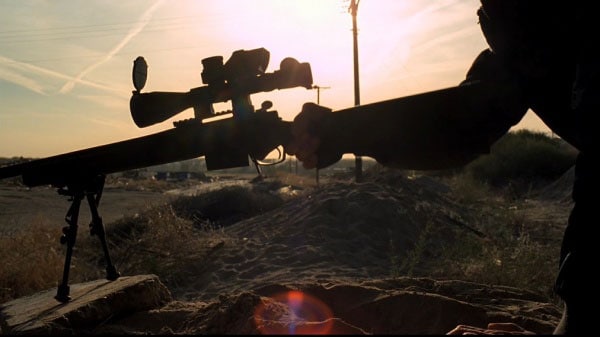 One of the most memorable of these moments was when the Juárez Cartel sent ‘Chickenman’ a message in the form of sniper Gaff, who takes out one of Gus’s henchmen before littering the ground with lead love letters, using a Remington 700 bolt-action rifle hiding under a Badger ordnance BDM bottom metal and Barrett BORS scope. 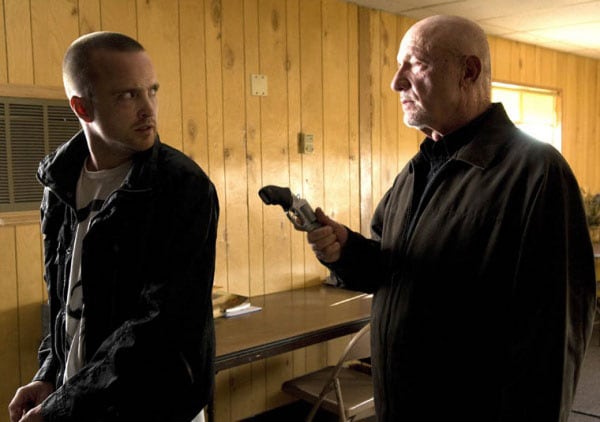 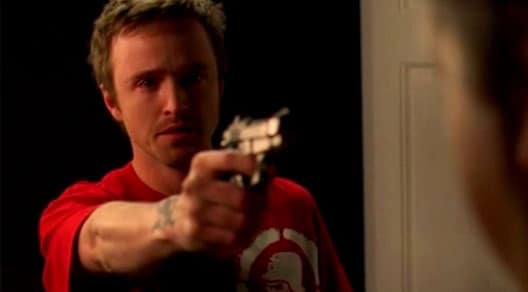 Jesse breaks bad with a Beretta.

Though their father son dynamic was far more morally grounded than the one between Jesse and Walt, these two also tended to bond over bloody things… and shared a seeming fondness for Beretta handguns.

After Jesse’s order of burgers with a side of Ricin gets intercepted by Fring’s crew, he buys a Beretta 84F to exact revenge on the two drug dealers who killed his friend, Combo (and used a kid to do it).

Mike takes out his former crewmember with a suppressed Beretta Cheetah and then threatens the paranoid Madrigal executive Lydia with it (who I think I dated in college).

When escaping Don Eladio’s compound (appropriately played by Steven Bauer), they both pick up some Beretta 92FS Inox pistols and Jesse empties a magazine into a cartel member, marking the second time Jesse kills somebody with a firearm. 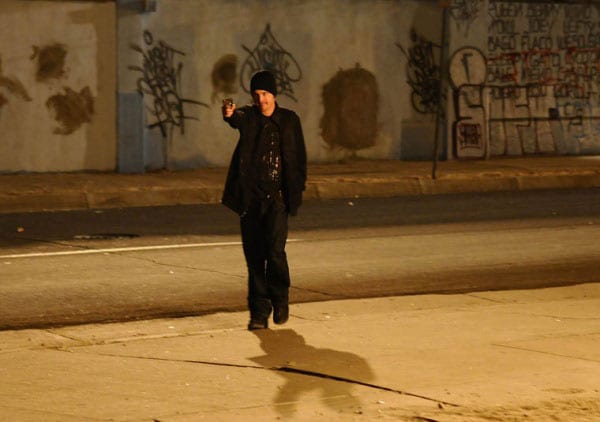 Jesse throws down on Gus’s crew with a Beretta 84F. 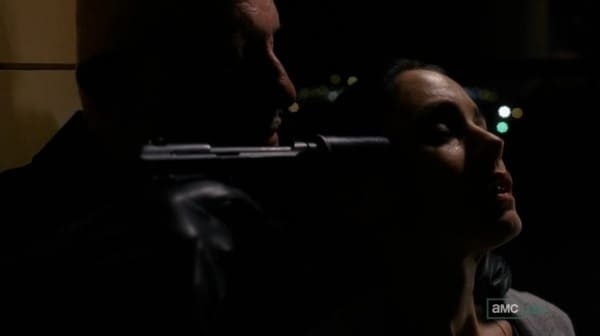 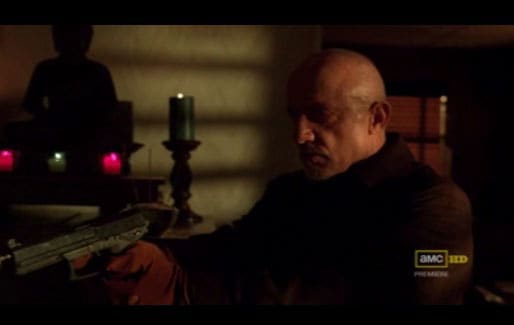 Throughout the third season Mike can be seen packing a Heckler & Koch Mark 23, often suppressed but the suppressor appears to be a fake “Hollywood ” silencer.

How can we tell? Because it screws into the barrel of the pistol via the threading for the blank adapter, rather than onto the exterior threading like a proper “can” should.   Perhaps they were looking to save on “postage”?

Mike uses the Mark 23 again in the fourth season to take out a pair of Ciudad Juárez cartel gunmen armed with Heckler & Koch MP5s who ambush a refrigerated truck transporting methamphetamine. 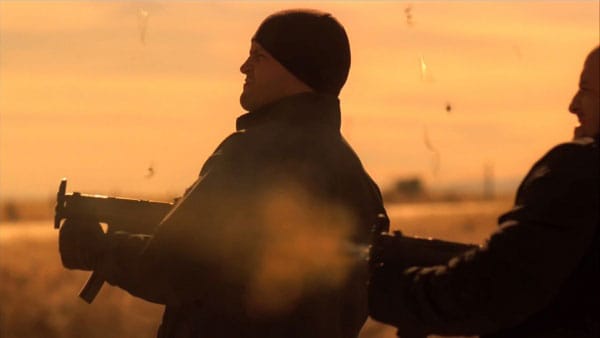 We don’t think you can have an action dramedy without a few MP5s.

With the police still looking for the rest of Gus Fring’s face and Walt learning the hard way that shooting Jesse James, doesn’t make you Jesse James.

In the fifth season Agent Schrader turns his attention to Mike, who is trying desperately to tend to his granddaughter’s future while cleaning up the smoldering embers of a volatile business enterprise.

And one of the first orders of business is to dump a whole bunch of guns down a well. 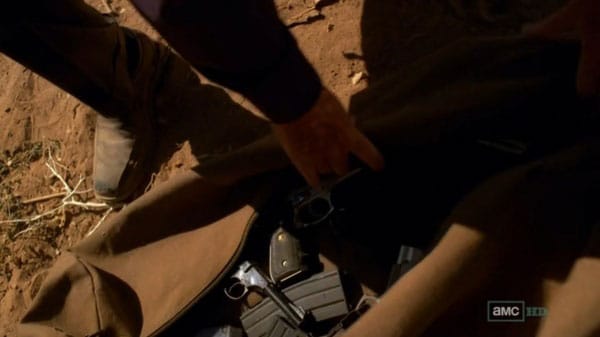 A Colt Woodsman makes a brief cameo in ‘Breaking Bad’.

We only catch a glimpse of the front portion of the pistol, but the high ramped front sight and the shape of the trigger guard suggest it is likely a 2nd series “Sport” model. 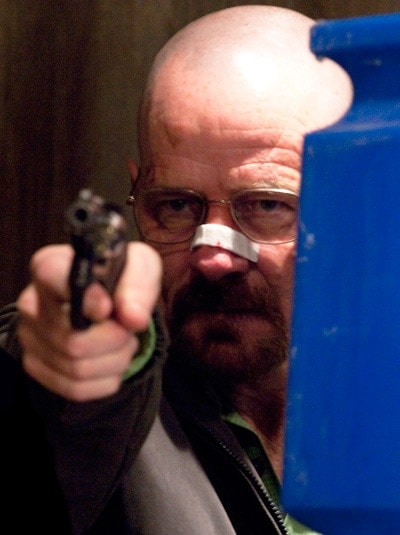 Walt and his favorite sidearm.

Compelling television is about emotion but stories that endure in people’s minds are about details because it’s in these little noticings that we can see characters like Walter White transcend the screen and come to life with tastes and motivations beyond the plot the audience is privy to.

In the aptly named episode “Thirty-Eight Snub”, Walt goes to an illegal arms dealer (played by Jim Beaver who we recognize from Deadwood) to invest in some personal protection.  And Beaver definitely knows how to speak Heisenberg’s language.

Part salesmen, part gun guy and part Constitutionalist, the dealer steers the novice gun owner away from a full-framed semi-automatic handgun and towards a smooth profiled Ruger LCR, praising the gun’s concealability, draw-ability and reliability and suggesting he load 158 grain hollow points for good stopping power.  He also sells him on an IWB holster and corrects Walt’s natural inclination to cross draw, explaining that this rig is usually reserved for sitting. 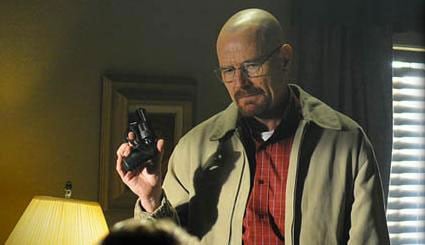 Walter White makes a purchase he does not seem to regret.

But what we like about this scene is that the dealer’s pitch (and Ruger’s design) must have made quite the impression on Walt as he seems to favor LCRs as his go to pocket rockets from there on out.

Though it’s never overtly acknowledged, several different versions of the revolver can be seen throughout season four, used in several capacities.

We even see Walt fishing out a frozen LCR from the soda machine at his carwash in season five, so it stands to reason that Mr. White liked the design so much, he stuck with it.  How’s that for an endorsement?

The barrage of bullets at the end of the episode ‘To’Hajiilee’, cut mid bang, may have been a bit unexpectedly “A-team” flavored, but the guns were most definitely straight out of the 2000s.  The one that caught our eyes (and we’re guessing the eyes of every self-respecting gun nut) was an AA-12 with a drum mag loaded with slugs.

How this ended up in Neo-nazi hands we’ll never know, but here’s hoping they’re on the other end of Walt’s new… 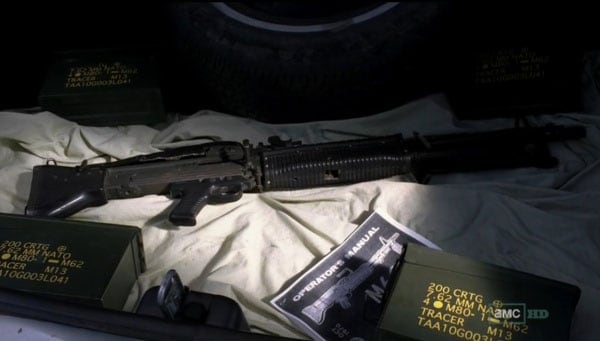 So many things in this life begin and end with an M60 in the trunk of a new/used car.

Vince Gilligan likes to give us pieces of the destruction to come at the beginning of each season to spur our imaginations and the signature clue that started season five was perhaps the most loaded: an M60 machine gun, a box of ammunition and an instruction manual.

How this will play in to the season finale Sunday is anybody’s guess but, really, what story can’t be ended with a general purpose machine gun?

As a rule, Guns.com identifies with Paladins, not villains, but, as one the freshest television sagas in recent memory comes to a close, we’re reminded of a quote by another controversial genius, satirist H. L. Mencken who wrote that when the chips are really down, “every normal man must be tempted to spit on his hands, hoist the black flag and begin slitting throats”.  So here’s hoping America is not just saying goodbye to Breaking Bad but also temptation.