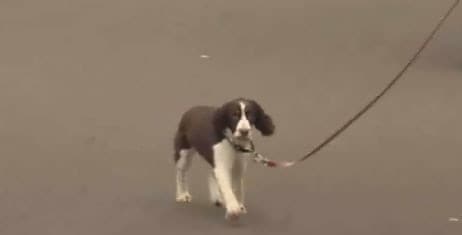 The little deaf dog was mistaken for a police dog by the intruder. (Photo credit: KGW)

A homeowner pulled a gun on an intruder armed with a knife Saturday morning in Salem, Oregon, and held him until police arrived.

When Dan Strasser’s dog came whimpering to him around 6 a.m., he didn’t think too much of it.

“I figured a skunk or squirrel got into the house because I have a door that I keep cracked for her to go in and out of,” Strasser told reporters, referring to his deaf 3-year-old Springer Spaniel named Bonnie.

Yet when he got out of bed, Strasser found 25-year-old Thomas Lowell in his living room, trying to take his laptop, music and other electronic equipment.

Strasser immediately yelled at his girlfriend to bring him his gun, which he admitted he actually hoped that in itself would be enough to send the suspect fleeing.

While Lowell did try to leave, ran into the garage instead of out the door. Strasser followed him and cornered him there. It was at that point Lowell pulled out a knife and threatened Strasser. However, as soon as Lowell saw that Strasser was indeed armed with a gun, he quickly dropped the knife, stood still and cooperated completely.

Strasser held the suspect at gunpoint, while his canine companion, Bonnie, sat on top of him, until police arrived.

Officers later said that Lowell admitted that he thought Bonnie was a police dog and he was afraid to move, not knowing what she might do to him. But Bonnie, of course, was just having fun with the suspect while he was down on the ground.

Police arrested Lowell without incident and charged him with burglary, criminal mischief, unlawful possession of methamphetamine and parole violation. 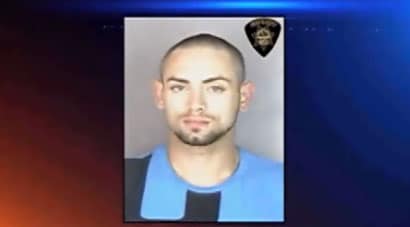 Strasser was thankful to have such a faithful dog and a firearm, but even more so that the situation ended the way it did and nobody was hurt.

“This sounds weird. I was thankful to have a gun because what that did is make sure nobody got hurt. I don’t know what he would do. I’m a fairly old guy so he could have thought I can get through you, but he decided not to do that when I had a weapon,” Strasser said.

Strasser also told reporters that he is having a doggie door installed for Bonnie and will no longer leave the door open, even though the normally quiet neighborhood has very little crime.