Chicago student arrested for gun possession, says he needed it for protection from gangs 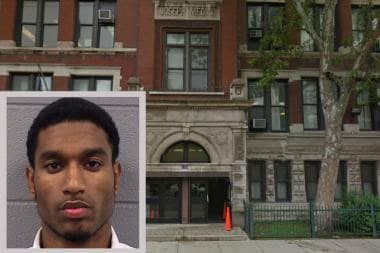 “We are committed to working closely with students, parents, faculty, the Chicago Police Department, Chicago Public Schools and the community to address this challenge,” school Principal Ron Bryant said in a statement. (Photo credit: Chicago PD)

High school junior Darnell Hamilton was arrested Tuesday when police discovered a gun in his locker at school, according to local media. However, the student said he only brought the gun to school to protect himself from the violent gangs that have harassed him for years on his way to and from school each day.

The 17-year-old takes two CTA lines from his Logan Square home to the Urban Prep Charter Academy on the West Side, and according to his mother, LaDonna Petty, that’s when he faces all the trouble.

“They wait for him when he gets off the train,” she said.

But this week was different for Hamilton, who was fed up with the harassment. According to the teen, he acquired a gun from a friend on Friday and tucked it away in his backpack to protect himself from the gangs who had threatened to kill him.

However, on Tuesday the weapon was seen by another student in the school, who reported it to the principal. The principal then called the police. When authorities searched Hamilton’s locker, they found a 9mm semi-automatic pistol in his backpack with a magazine full of eight rounds. However, school officials later stated that the gun was not loaded.

The 17-year-old was arrested and charged as an adult for unlawful use of a weapon and possession of a firearm in school. Both of which are felonies.

Evan Lewis, chief operating officer for Urban Prep Academies, which prides itself on all of their seniors being accepted into four-year colleges, assured that the teen had never been in trouble at the school before and that he also knows the students face many challenges in the city.

“The surrounding communities around our West Side campus has its issues and certainly our students may face challenges going to and from school,” Evans said. “But those challenges are no different than other students attending urban schools. We provide security at all our campuses and one thing I can tell you is we had no issues with Mr. Hamilton at the school.”

In fact, Hamilton has maintained a 4.0 GPA and has already been guaranteed a scholarship at Ohio State University. However, he was hoping to attend either Duke University or Howard University to study computer engineering.

Also, police told the Chicago Tribune that Hamilton had no gang affiliation.

Petty hopes that the arrest will not keep her son from graduating and pursuing his post-high school dreams. “He made a bad choice and he wanted to protect himself,” she said.

Petty also feels that her son has learned his lesson from the incident, adding, “He said it will never happen again.”

Hamilton had his first appearance in court Wednesday, still dressed in his school uniform: a white buttoned-down shirt and khaki pants. His bail was set at $75,000.

Petty said that she had moved out of the city several years ago to protect him from the violence, but had to return when she lost her job.

“What are you supposed to do when you live in the city and your child is afraid?” she said with tear-filled eyes. Regardless, she knows that her son should never have brought the gun to school and he knows it as well. “He said, ‘Mom, I made a mistake,’” Petty said.

Authorities did not indicate who sold the gun to Hamilton, other than that it was a friend of the boy’s, and it is unknown at this time if that person will also face charges.