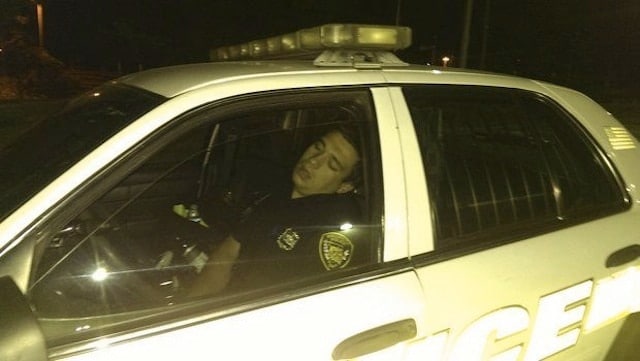 This Belleville police officer was caught sawing logs while in full uniform.

An off-duty Belleville police officer was suspended after a township resident caught him napping in his cruiser earlier this month.

Belleville Police Chief Joseph Rotonda, refused to identify the slumbering public servant who fell asleep at the wheel while in full uniform around 5:30 a.m. on Sept. 9.

Anthony Telinski, 27, who discovered the snoozing officer while riding his bike in the area of Franklin Street and Watessing Avenue, was more than a little upset.

“I do pay taxes, and to see my tax dollars at work like that was outrageous,” Telinski said.

The amateur photographer posted the picture to several Facebook groups, as well as YouTube, where it eventually garnered the attention of a township police officer, according to Rotonda.

Rotonda said the officer was working an off-duty detail during the time of the incident, but was still suspended for falling asleep while in his uniform. The officer, who remains anonymous, had only been on the job for less than a year, and Rotonda declined to say how long his suspension would last.

“He was working an off-duty job but that doesn’t excuse him from the Belleville Police Department’s rules and regulations,” Rotonda said. “It’s something we won’t tolerate and we took immediate and appropriate action.”

Telinski said that after he snapped and posted the photo, he was harassed by several township officers, who claimed he was “impeding traffic while riding his bike and was repeatedly referred to by the moniker, “the photographer.”

Furthering his claims of unwarranted persecution, Telinksi said he was searched and arrested on a “bogus warrant,” though Rotonda provided clarity to the situation, saying that in actuality, Telinksi was arrested for possession of heroin with intent to distribute.

Eventually, Telinski admitted to intermittently struggling with addiction after he was prescribed painkillers after a serious accident that caused him to suffer 24 broken bones. He is once again in treatment, and stated he is “not ashamed’ of the police department’s accusation.