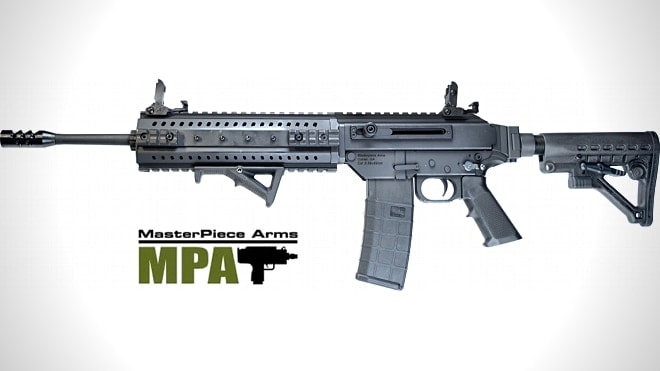 MasterPiece Arms is best know for their MAC-style pistols and carbines, as well as their Protector series of pocket pistols. But they’re going to turn a few heads with this recent design, the MPAR 556.

The MPAR 556 is a piston-driven, stamped steel design that resembles a handful of older designs that have faded away over time, namely the AR-18 and designs based on it, like the Leader T2 MK5.

On the surface it looks somewhat like an AR-15 with a quad rail, but a quick look at the receivers lets you know something else is going on entirely. Using stamped steel for the receivers, the MPAR has practically nothing in common with the AR-15.

It’s safe to say that this is an all-new design.

The MPAR has a full-length flattop rails and matching free-floating handguard concealing a short-stroke piston system, a non-reciprocating charging handle on the left side that doubles as a forward assist and an AR-15-style tubular side-folding (bufferless) buttstock extension. The stock folds down a bit as to not interfere with case ejection; it can be fired folded.

About the only things it shares with AR-type rifles is that it uses the same pistol grips, magazines and buttstocks. The top rail appears to be slightly taller than an AR so it’s not totally compatible with AR sights; it may work better with low-profile sights for HKs and other piston-driven rifles. Alternatively you can install a cheek riser or just adjust your cheek weld.

MasterPiece Arms has updated the MPAR product page since its announcement, and the specifications look good.

In addition to sporting a parkerized steel chassis, the MPAR has a hard-anodized aluminum handguard that accepts modular rail sections, giving the rifle’s users as many optic and accessory options as possible.

The aluminum also helps keep the weight down. Unloaded the MPAR 556 weighs 7.8 pounds, which is right in the ballpark for most service rifles, even a little surprising given the MPAR’s heavy use of steel in its construction. The rifle has a 16-inch 1-in-9 barrel. We would be awfully surprised to find that this gun doesn’t like steel surplus ammo.

The MSRP is right at $1,000, which makes this gun fairly competitive with much of the AR-15 market, particularly the piston-driven ARs, which usually command a fair price premium. Hopefully the real-world prices will be even lower, although for particularly novel guns it can take time for prices to drop.

If you’re looking for something different, something short-stroke and something new and interesting, you might want to check out the MPAR 556. This is one gun we would love to take to the range.