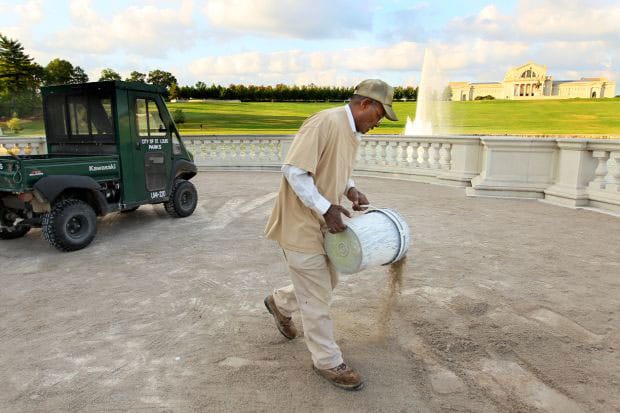 A park employee cleans up blood from the deadly shooting. According to police spokeswoman, Leah Freeman, there have been six assaults, one rape, one robbery, 216 property crimes, 204 reports of larceny and 12 auto thefts in Forest Park this year. (Photo credit: St. Louis Post-Dispatch)

A late-night jog in in a St. Louis park had a deadly ending when three young men attempted to rob a man and his female companion, a local Fox affiliate reported. Little did the three suspects know that one of their intended victims was an off-duty St. Charles County sheriff’s deputy who was packing his .40-caliber service pistol.

It was just after 11 o’clock Monday night when the two were jogging in Forest Park. When the trio of suspects slowly passed by the two, the deputy immediately became suspicious and pulled his gun to his side.

The deputy’s instincts were right on, because the trio then circled back around with the intent to rob them. One of the men, 18-year-old Antonio Nash pointed a gun at them, while the other two, Joshua Hunter and Jamaal Robinson, both 20, acted as if they too had guns under their shirts. As Nash pointed the gun at the two, Robinson said, “Don’t make me kill you.”

The 16-year law enforcement veteran then identified himself as a police officer and opened fire on the three suspects. Nash was hit three times in the abdomen and was pronounced dead at the scene. Hunter was shot in the buttocks and Robinson was shot in the neck. Both are now listed in stable condition.

Hunter and Robinson were charged Tuesday with second-degree murder, attempted robbery, first-degree robbery and armed criminal action. In the state of Missouri, second-degree murder charges, also known as felony murder, may be filed any time that a person is killed during the commission of a felony, regardless of who is killed or how.

No charges are expected to be filed against the deputy, whose identity has not been released. 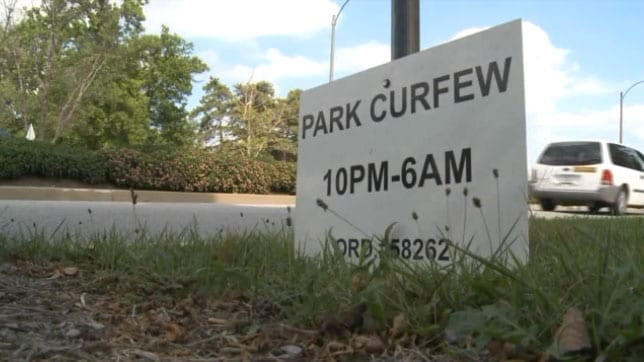 The off-duty deputy jogged past curfew, but the sheriff said it’s not all that unusual for deputies who work second shift to jog after work with their duty weapon. (Photo credit: FOX)

“If someone is going to rob you and point a gun at you, you can assume they have intent to kill you,” Neer added. “That’s what guns do, they kill you.”

Some question why the couple were jogging so late at night, after curfew, but Neer doesn’t think it was all that odd.

“It wouldn’t be unusual for police officers who work evening shifts or late shifts to jog at midnight after they get off work. So as far him jogging at 11 at night with his duty weapon, I don’t find anything unusual about that at all,” Neer said.

Nash’s mother, Stephanie, said that the teen had been in trouble before and that he had recently lived at a homeless shelter for teens. She also said that she did not know the other men involved.

“Right now, I’m just trying to get past this day,” was the only comment she offered to the media.

Neer indicated that the deputy was troubled over having to take the teen’s life. “He’s dealing with it, and obviously he’s upset over the situation,” Neer said.