A 12-year-old Rhode Island middle school student was suspended Thursday after teachers discovered he had a small, toy gun in his backpack.

Joseph Lyssikatos, a seventh grade student at Shawn Feinstein Middle School, said he won the keychain toy at an arcade. After it fell out of his backpack, classmates quickly snatched it up and began showing it off to others, according to WCAU-TV. 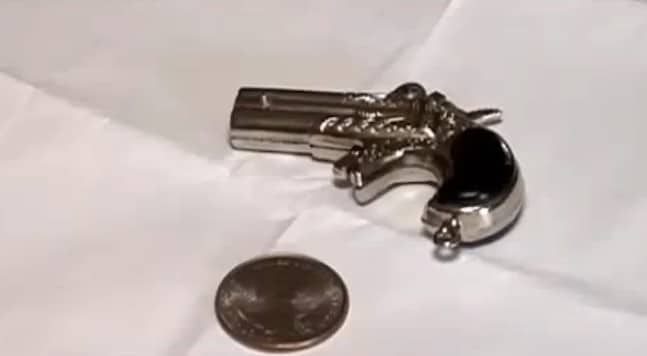 The toy gun was won from an arcade and is barely larger than a quarter.

“This boy was the one waving it or showing it to other kids, not Joseph,” Bonnie Bonanno, Lyssikatos’ step-mother said. “Joseph wasn’t doing that, so why weren’t both of them reprimanded?”

A teacher noticed the facsimile weapon being passed around and promptly confiscated it. Soon after, Lyssikatos was suspended for three days by school officials for violating their “zero tolerance” policy against firearms or replicas.

“I think it was excessive,” she continued. “Especially for being a one-and-a-halh inch keychain.”

Bonanno plans to appeal the suspension to the district superintendent, as well as complain to the Rhode Island Department of Education. The school’s policy explicitly states suspensions are only to be determined by the principal, but according to Bonanno, the school’s behavioral specialist issued the suspension. 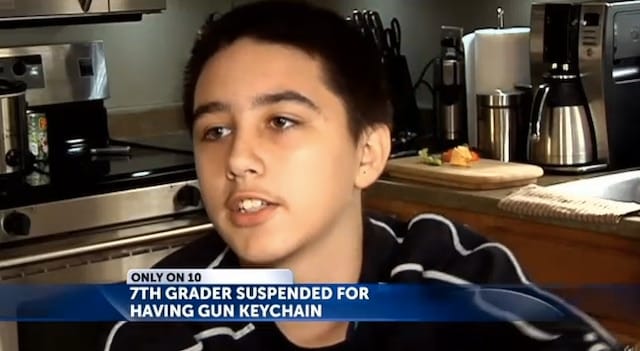 Lyssikatos was suspended for three days and is banned from attending an upcoming field trip.

School officials declined to comment on the incident, saying,” Because this is a student discipline issue, we cannot comment on any specifics.”

Adding insult to injury, Lyssikatos has now also been forbidden from attending an upcoming class field trip at the end of the month.

“That’s disgraceful, because, Ok, being suspended fro three days, and this big punishment is enough for him mentally,” Bonanno said.