The NBC Sports Network is canceling the NRA-sponsored hunting show “Under Wild Skies” after the host and NRA lobbyist Tony Makris likened his critics to Adolf Hitler, reports Media Matters.

During a hunting trip in Botswana, Makris shot an elephant in the face and then, with his guide, toasted to victory with champagne.

Some American viewers found the episode distasteful and expressed outrage towards the hunt, even going so far as creating an online petition on Causes.com for cancellation of the “inhuman hunting show” shortly after the episode aired. The petition has so far gotten more than 100,000 signatures.

Last Thursday, during the interview with Cam Edwards, host of the NRA News show “Cam & Company,” Makris described conversations he recently had with animal rights advocates in which he discussed his rationale for hunting elephants.

Makris suggested that if you think it’s ok to hunt one type animal, like a pigeon or a duck, but not another, like an elephant, than you subscribe to a type of “animal racism.” 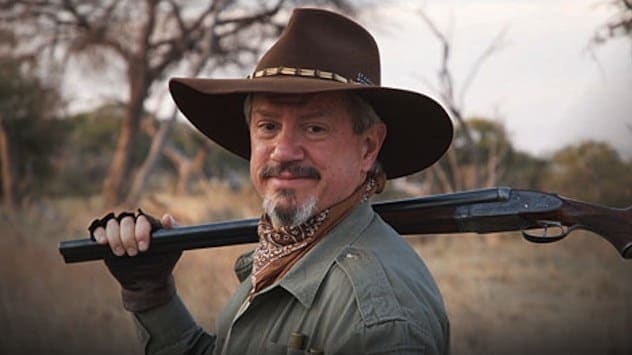 Tony Makris refused to answer how he gets the perfect blend of gray and black in his beard.

“Do you realize that if you subscribe to that philosophy you are committing a very unique form of animal racism?“And now they’re shocked. And they said, ‘But [elephants are] so big and special and they’re smarter.’ And I went, ‘You know, Hitler would have said the same thing,” Makris said.

That following Saturday, an NBC spokesman told Deadspin, “Under Wild Skies will no longer air on NBC Sports Network due to the program’s close association with its host, whose recent comments comparing his critics to Hitler are outrageous and unacceptable. NBCSN will continue to air all of our other quality outdoor programming.”

The LA Times reported that the show “Under Wild Skies” is not actually produced by NBC Sports Network, but is actually known as a “time buy,” meaning outside producers pay to air content — similar to an infomercial.

According to the BBC, commercial hunting in Botswana will be banned in 2014 as the country’s government has concerns over a sharp decline in wildlife species, such as elephants.