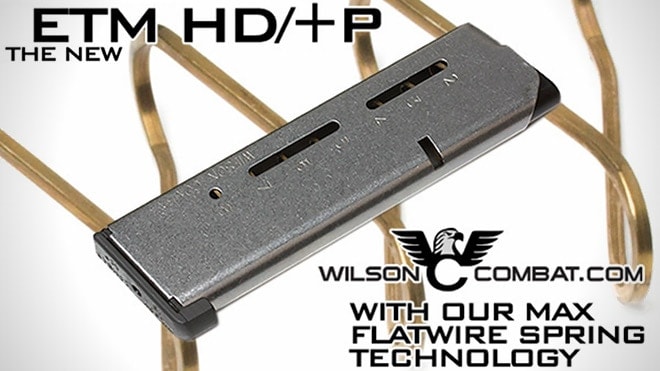 The 1911 is a timeless, effective and cherished firearm. Unique in more ways than one, gun owners gladly accept a handful of design quirks to own what is realistically the most popular gun in America.

One of those quirks is particularly outstanding, to the point where if it were common to any other service pistol, that gun would be looked down on by much of the shooting community. It’s just that a lot of 1911s are shipped with — and we’re getting technical here — just crap magazines.

It’s to the point where even if a 1911 ships with a decent, even acceptable magazine, many gun owners will still replace the factory mag with an aftermarket one just as a matter of precaution.

This feeds back into the production of factory magazines; why spend money making a solid factory magazine when the guns’ future owners are just as likely to toss the magazine into a box of unused gun parts and forget about it from that point on? 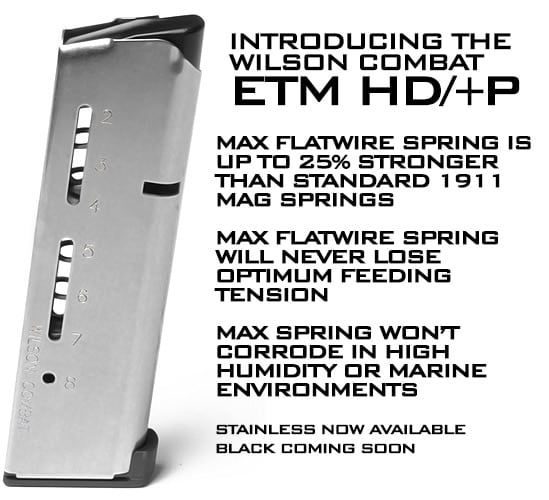 Of course, that is not the case with Wilson Combat 1911s, because they ship with some of the highest-rated magazines on the market.

Wilson Combat is taking their magazine construction to a new level. They’re rolling out new 1911 “Elite Tactical” magazines (ETM) that — if it was pretty much any company other than Wilson Combat, would not be believable — promise to never wear out, never lose tension, no matter how many times they’re cycled, no matter how much +P they’re used with.

“Guaranteed to never need replacement, the ETM with MAX spring will change the 1911 magazine forever,” states the Wilson Combat press release. “Our testing has shown these to be the most reliable 8 round, .45 ACP 1911 magazines in the world.”

“The heat-treated MAX flatwire construction never gets stressed or over-compressed like a conventional spring and is guaranteed to never require replacement even after high round counts or daily, extreme duty use,” the release continues.

While the spring tension may outlast the rest of the magazine, even a 1911, nothing really lasts forever. Wilson does, however, have excellent customer service in the event that one of these ETMs does eventually fail, even if that is many years from now. These magazines are covered by Wilson’s “no risk” policy; if one ever breaks with normal use, Wilson will replace it. Of course, any consumer would expect as much for a $45 magazine. 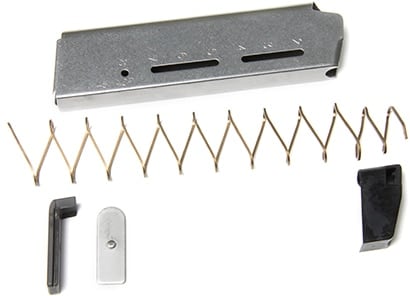 These are some of Wilson’s most expensive magazines, that’s for sure. But if they last as long as Wilson guarantees them for, we’re sure the company will have no problems finding buyers.

In addition to having an improved spring, this magazine design is intended to improve firearm reliability with a handful of other features, including a curved self-lubricating nylon polymer follower that’s not likely to tilt or bind, delivering all types of ammo straight to the chamber.

The metal components of the magazine are all heat-treated and corrosion resistant, even in humid and maritime conditions. The spring is over-tensioned to ensure positive slide lock, and the magazine tube itself is the strongest tube Wilson has ever made, and that’s saying a lot.

Despite the price, with these features and Wilson Combat’s reputation behind these magazines, there is no doubt Wilson will sell them by the truckload. The only thing they can screw up is not having enough of them in stock.

For all the details, head over to the ETM product page.