The NRA has called for armed security in schools for years to no avail. (Photo credit: CNN)

“The only thing that stops a bad buy with a gun is a good guy with a gun,” was the centerpiece of the National Rifle Association’s plan to prevent active shooters in schools. NRA CEO and Vice President Wayne LaPierre proposed it during a press conference just days after the tragedy at Sandy Hook.

Although many, including President Obama, criticized the singular idea of armed guards in schools as a preventative measure because of its simplicity, the Obama administration is now moving forward with the idea.

The Justice Department announced Friday afternoon that under the Community Oriented Policing Services about $45 million would be used this year to put 356 additional armed guards in schools across the country, CNN reported, for a total of $125 million in grants to be dispersed over the next three years.

And at the top of the list for additional school security is Newtown, Connecticut, with two new officers being trained up for the schools this year.

“Just over nine months after the senseless mass shooting at Sandy Hook, we remain committed to providing every resource we can to ensure that the children of Newtown can feel safe and secure at school and elsewhere,” Attorney General Eric Holder said in a statement Friday when the funding was announced. “And as we hold lost loved ones in our thoughts and prayers, we resolve to continue to support and protect this community — and to help them heal together.”

The idea of putting guns in schools has been a debated and highly heated topic since the tragedy in Newtown. Parents, law enforcement, school staff and politicians have argued over what measures would best protect students. Ideas range from banning assault-style rifles to allowing teachers to be armed, but nobody could seem to agree on anything.

Even the COPS program seems like a compromise for the NRA. LaPierre called for armed guards in every school, not necessarily law enforcement, but the Obama administration’s plan will only create more police officers for the schools through local law enforcement.

The NRA has long claimed that allowing law-abiding citizens to arm themselves is a far better solution to mass shootings than the many proposed gun control measures, claiming that the problem doesn’t lie within the guns themselves, but rather those holding them when they carry out these horrific acts.

LaPierre, and other gun rights advocates, argue that mass shootings only happen in “gun free zones” where people are unable to arm or protect themselves.

“Will you at least admit it’s possible that 26 innocent lives might have been spared?” LaPierre posed, in reference to if there had been an armed individual at the Connecticut elementary school. 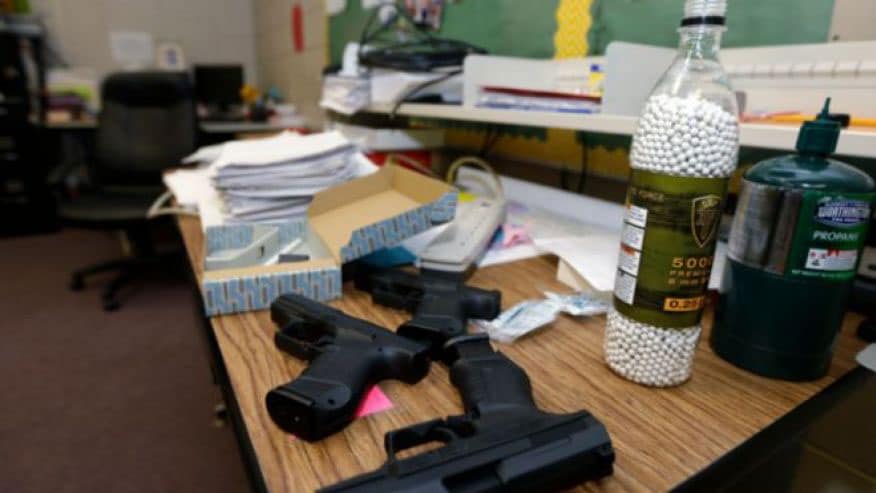 Of course, there are those that agreed with LaPierre’s stance on school safety from the beginning, and many schools across the country opted to train and arm teachers this past summer as they prepared for the start of the new school year.

But the idea of having trained, competent and armed guards in schools to protect the lives of America’s school children can certainly be a viable solution, even to those who oppose pistol-packing teachers.

“In the wake of past tragedies,” Holder said, “It’s clear that we need to be willing to take all possible steps to ensure that our kids are safe when they go to school.”