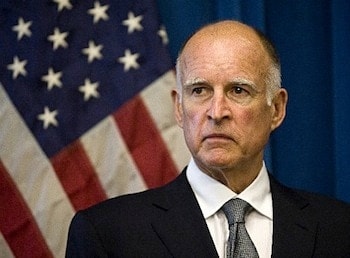 This is Gov. Jerry Brown, whose aura smiles and never frowns.

The National Rifle Association has vowed to sue the state of California if Gov. Jerry Brown signs the Life-Saving Intelligent Firearms Enforcement Act into law, a bevy of gun control bills that significantly curtails the Second Amendment rights of law-abiding citizens.

Of the most egregious measures included under the LIFE Act is Senate Bill 374, which would prohibit the manufacture, sale or possession of any semiautomatic centerfire rifle capable of accepting a detachable ammunition magazine.

Gun owners who currently possess these commonly owned and widely popular firearms, which the state will now consider “assault weapons,” will be allowed to maintain ownership, however they will be required to register them at an estimated cost of $20 per firearm by July 1, 2015. They will also be prohibited from transferring them to friends, family, children or grandchildren.

On its website, the NRA-ILA explained the far-reaching effect of this measure, “Millions of semi-automatic rifles have magazines that can be removed with the push of a button, and, at a minimum, those will likely be considered “assault weapons” under SB 374.”

“That classification would include classic hunting rifles like the Remington Woodsmaster, Browning BAR, and the Ruger 99/44, among many others,” explained the NRA-ILA.

The nation’s gun lobby argued that SB 374 is in “direct conflict” with the U.S. Supreme Court’s Heller decision, which ruled that arms “typically possessed by law-abiding citizens for lawful purposes” or those “in common use” are constitutionally protected.

Sam Paredes, executive director of Gun Owners of California, echoed the NRA’s constitutional critique of the law, telling the Associated Press that if the law is signed, there will be a legal challenge.

“No question about it. The bill will make half of the rifles in existence ‘assault weapons,’ and make them illegal,” he said, adding “That’s like banning handguns. It’s an entire class of guns that are being banned.”

But Senate President pro Tempore Darrell Steinberg (D-Sacramento), the sponsor of SB 374, has argued in the past that the bill will pass constitutional muster and that semiautomatic rifles with detachable magazines are not appropriate for responsible citizens.

“These types of weapons have in fact been used in many of the mass killings our country has suffered over the years,” continued Steinberg. “In nine out of 10 of those mass killings, the shooter had no serious prior criminal history. It’s time to reduce the carnage. It’s time to close the loopholes.”

In addition to SB 374, there are other measures in the LIFE Act that are rather onerous, they include (Source: SmartGunLaws.org / Senate.ca.gov):

– SB 683 (Block): Expands the safety certificate requirement currently mandated for handguns to all guns and requires performance of a safe handling demonstration to receive a long gun.

California law currently requires an individual to obtain a “handgun safety certificate” before purchasing or receiving a handgun. The certificate is obtained by taking and passing a written test on firearm safety and is valid of five years. SB 683 would require a “safety certificate” for the purchase of all firearms, not just handguns.

– SB 567 (Jackson): Updates the definition of a prohibited assault weapon to include a shotgun with a rifled bore and revolving cylinder.

The governor has until Oct. 13 to sign or veto the bills. Thus far, Brown has not given any indication as to which bills he will sign/veto.