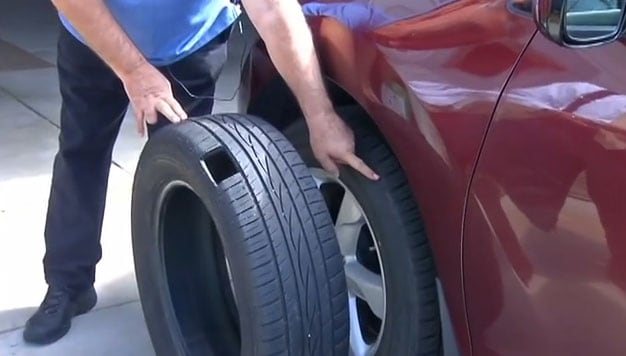 Mike Cardella shows reporters where the .223 round hit his tire. (Photo credit: ABC)

The town of Castle Rock, Colorado continues to support the actions of a police officer who opened fire on two burglary suspects as they sped past on an open road, despite the fact that he missed his intended target and hit the vehicle of an innocent bystander.

According to a report by ABC, the bystander, who is also a retired police officer, is demanding answers, but the police department maintains that the officer was not wrong or reckless in his actions.

The incident occurred back in February as Castle Rock police were attempting to catch suspects who had burglarized a nearby residual area. One suspect, Tshinbanda Kazadi, was driving a vehicle while the officer, whose name has not been released, positioned himself at a street corner, armed with an AR-15, and waited for Kazadi to drive by.

According to the officer, as Kazadi approached him, he felt an immediate and imminent threat, sensing that Kazadi was going to use the vehicle as a weapon and run him over. So the officer opened fire on the vehicle. However, as the vehicle passed, the officer then turned and continued firing.

Mike Cardella and his wife were driving on the opposite side of the road from the officer before the shooting took place. Cardella saw the armed officer and foreshadowing what was about to occur, pulled over, stopped the car, told his wife to get down, and crouched over her body in an effort to protect her.

“I screamed at my wife, Susan, grabbed her and pulled her down and covered her with my body,” Cardella recalled.

As shots began to ring out, the Cardella’s vehicle rocked and at that point Cardella knew that their car had been hit. Upon examining the vehicle, Cardella realized that the high-powered .223 round had struck the car just two feet from the windshield, where it quite possibly could have hit him or his wife.

While Cardella, who is a retired Nevada police officer and state patrolman with 30 years of experience, does not question the cop’s use of force when he felt his life was in danger, he does question why the officer acted in what he believed was a reckless manner by continuing to fire after the car – and the immediate perceived danger – had passed, sending bullets into the direction of innocent bystanders with a local high school situated right behind them.

Additionally, Cardella noted that the officer could have made a far better choice by opting to use a shotgun, which would have had considerably less range than the AR-15, in the busy residential area. 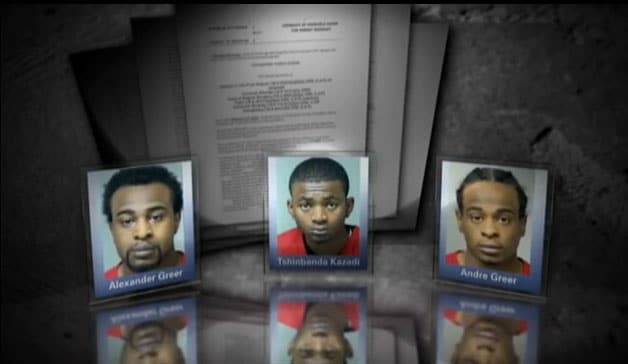 Immediately following the incident, Cardella said that the original response from the town was insulting. Lawyers wanted him to sign a legal release stating that he was unaware of who shot his vehicle and that he would not sure the police department or the officer involved. He was also told that the town would pay for the damages to his car, but only after he agreed to sign the release.

At that point, Cardella hired a lawyer of his own.

And to add fuel to the fire, Cardella claims that officials refuse to give him any information concerning the incident.

“I want to know what the findings were,” Cardella said. “I wanted to be able to read the reports. I’ve got questions that need to be answered.”

The Douglas County District Attorney determined that the officer involved had not broken any laws when he opened fire in the residential area near the school.

Castle Rock Police Chief Jack Cauley also said that an internal investigation revealed that the officer had done nothing wrong and acted in an appropriate manner. Cauley also refused to release records or offer any specific comment on the incident.

“The Castle Rock Police response during the above-referenced criminal episode, including the use of force, has been the subject of external and internal reviews and was found to be in conformance with department policy and established law-enforcement protocols for use of force based on specific facts involved in this event,” Cauley wrote in a statement. “Because these reports address specifics of the underlying crime and arrest for which there are pending charges in the Douglas County District Court, the reports may not be released at this time.”

But Cardella still has questions that he wants answered, mainly how the officer was found to be justified in continuing to fire once the vehicle had passed him and was no longer an immediate threat.

“I wasn’t in pain,” she recalled. “But my heart just started racing so hard I almost started blacking out, and I’ve never felt that before.”

With tear-filled eyes she told reporters that she’s currently in therapy and that the sound of any loud noise now terrifies her.