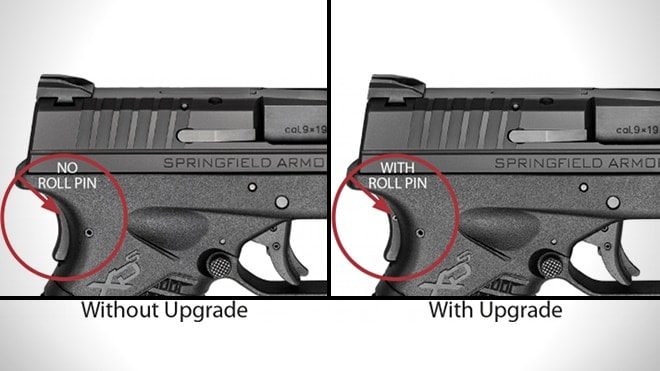 Over the past few weeks we’ve had several readers ask us for an update on the XD-S pistol recall. Late August, Springfield issued a voluntary safety recall of a series XD-S handguns, and the turnaround time is running long.

Springfield issued the recall which only affects select XD-S single-stack concealed-carry pistols, not any of the other XD-series guns, but it does affect both 9mm and .45 ACP XD-S models.

We contacted Springfield to find out more about what issues are holding up the recall process and they directed us to their frequently-asked questions page for more information. However, a recent update to the Web page dedicated to the recall implies that the fix is not a straight-forward repair.

Springfield is telling customers that the turnaround time for the repair is 10 to 12 weeks from the point when they receive the guns.

The new XD-S pistols have an added roll-pin and a new grip safety design. It will be interesting to see if future XD pistols sport the same modification, or if it addresses a flaw that is limited to these guns specifically.

It is likely that the hold-up was due to having to re-design a significant component or components of the affected handguns, and that Springfield’s engineers couldn’t fix the guns with a simple parts swap; if the parts have to be custom-fitted on top of everything else that would add a lot of shop time overhead.

We don’t know what the new safety design does in particular but we do know that XD-S pistols that have the fault in question can slam-fire and double-fire, a dangerous and potentially life-altering problem. So please, check your XD-S pistols to see if they are included in the recall numbers. This is a problem you want fixed.

And while we don’t know the specifics surrounding the issue or issues these pistols are incurring, Springfield has updated their frequently-asked question page with a great deal of information surrounding this recall.

If your XD-S pistol (or pistols) have had to go back to the factory and you’re experiencing a delay, know that you’re not alone, and check out the FAQ.

There have been several other significant recalls recently, including manufacturers Smith & Wesson and Caracal.