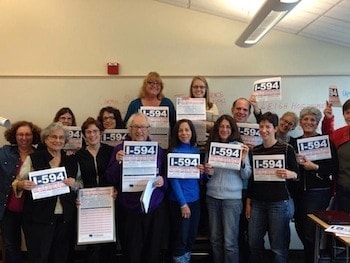 Supporters of I-594 gather at the Temple Beth Am in Seattle, Washington. (Photo credit: Facebook)

Gun-control activists in Washington State plan on turning in their signatures next week for a universal background check initiative, the secretary of state’s office announced on Friday.

Supporters of Initiative 594 told the Associated Press that they will submit the first batch of signatures this coming Wednesday, three months before the Jan. 3 deadline.

Christian Sinderman, a spokesman for the Washington Alliance for Gun Responsibility, explained that while they’re still short on signatures, they haven’t reached the state-recommended 325,000 valid signatures of registered voters, they’re “excited about” the progress they’ve made thus far.

“We want to assess where we are in terms of actual numbers and use this as an opportunity to demonstrate the incredible support for the measure and help us build momentum through the fall,” he told the AP.

Specifically, I-594 would make all gun transfers or sales subject to a criminal background checks, including private transfers made over the Internet or at gun shows.  Gun owners and prospective purchasers would be required to go to a federally licensed gun dealer when transferring a firearm.  The FFL or the gun shop owner would run the background check for the prospective buyer/transferee.

If supporters meet the 325,000 benchmark, the initiative would then go before the Legislature, where lawmakers could do one of three things, as the AP pointed out: “They could vote on the measures, and the measures would appear on the November ballot if they don’t pass; they could take no action, meaning the initiatives would go straight to the ballot; or they could recommend an alternate measure to run alongside the initiatives on the ballot.”

In response to I-594, gun rights advocates are running their own initiative, I-591 also known as the “Protect Our Gun Rights Act,” that seeks to safeguard the Second Amendment rights of law-abiding citizens.  I-591 would prevent Washington State from adopting background-check laws more restrictive than the federal standard.  Under federal law it is illegal for one to sell a firearm to someone they know to be a felon or a person prohibited from owning a firearm.

Additionally, the initiative would prohibit any confiscation of firearms without due process.

“The best defense is offense,” Alan Gottlieb, of the Bellevue-Washington- based Citizens Committee for the Right to Keep and Bear Arms, who drafted the initiative, told the Seattle Times back in June when it was introduced. “We’re giving the voters — who we think are very smart — an alternative.”

In the spring state lawmakers debated an expanded background check bill that contained certain exemptions for law enforcement officers and concealed carry permit holders.  That bill failed to clear the state House and Senate.  I-594 does not contain any of those exemptions. Here is the I-591:

BE IT ENACTED BY THE PEOPLE OF THE STATE OF WASHINGTON:

NEW SECTION. Sec. 1. A new section is added to chapter 9.41 RCW to read as follows: It is unlawful for any government agency to confiscate guns or other firearms from citizens without due process.

NEW SECTION. Sec. 2. A new section is added to chapter 9.41 RCW to read as follows: It is unlawful for any government agency to require background checks on the recipient of a firearm unless a uniform national standard is required.

NEW SECTION. Sec. 3. The provisions of this act are to be liberally construed to effectuate the intent, policies, and purposes of this act.

NEW SECTION. Sec. 5. This act is known and may be cited as the “Protect Our Gun Rights Act.”

In the past, Guns.com has spoken with Alan Gottlieb of the Citizens Committee for the Right to Keep and Bear Arms on the subject of background checks: