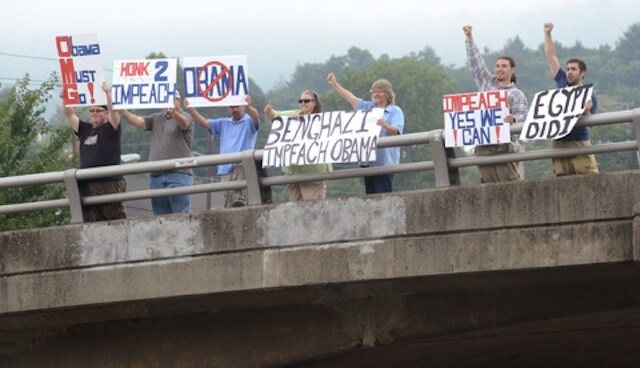 Toni Pendley said a man drove up and pointed a gun at her while she was protesting with ‘Overpasses to Impeach Obama.’

During a protest to impeach President Barack Obama, two Georgia women alleged one man responded by pointing a gun at them.

Gwinnet County Protestors Toni Pendley and Marge Moore were on Steve Reynolds Bouelvard taking part in the nationwide protest called Overpasses for Obama’s Impeachment – where those in opposition of Obama’s presidency take to highway overpasses with anti-Obama signs – when a man drove up.

“I was standing there with a sign and I looked and he had a gun pointed at me. He was looking straight at me,” Pendley told WSB-TV’s Kerry Kavanaugh.

Moore also saw the man, but didn’t spot a gun, saying, “He was in the driver’s seat. He was the only person in the car.”

At least one other witness believed the man had a gun and called 911. WSB-TV verified the story by obtaining a copy of call.

But pointing a gun at the protestors wasn’t enough for this mystery menace. He also sprinkled them with some sort of liquid before speeding away.

“All of a sudden he leans over and I feel this liquid on my foot,” Moore said.

Undeterred, the women filed a report with the Gwinnet County Police Department and said they’re not backing down.

“We’re going to come back out here. We’re not going to let him intimidate us or anyone,” Pendley said.

Standing their ground and refusing to bullied into submission, the women said they plan to return to same spot on Saturday to resume their protests.