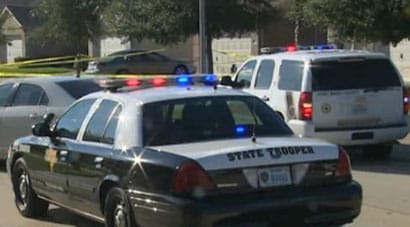 “We try to teach our children to do what’s right and I thank God that he is okay,” the teen’s father, Houston police officer Ken Patmon, pictured here in the blue shirt, said. (Photo credit: KHOU)

In what’s described by neighbors as anything but a normal afternoon, an 18-year-old boy shot and killed one intruder and sent a second fleeing after they broke into his Richmond, Texas home Friday afternoon.

It was just after 3 o’clock when Houston police officer Ken Patmon was on duty and received a terrifying phone call from his son, an ABC affiliate reported. Patmon’s teen son, who has not been identified, told his father that someone was banging loudly on the front door. The teen knew something wasn’t quite right about the situation.

Patmon explained that as he was on the phone with his son when the incident first started. “He said, ‘Dad, someone’s banging on the door.’ This is certainly not customary here,” Patmon said

The banging then stopped, but then the teen heard knocking on the back door. Within moments two men had forced their way into the home and the teen came face to face with the uninvited strangers.

Patmon, who had already called 911 for his son, remained on the phone with him. “I’m talking to my son, making sure he’s good and I’m telling the dispatchers everything that’s going on so I can get some deputies out here,” he said.

But before deputies could make it to the home, one of suspects started to make his way up the stairs towards the teen. Only what the suspects didn’t realize is that the boy was armed with his father’s pistol. He took aim and fired a single shot, hitting one intruder. The second intruder immediately ran out of the house.

When Fort Bend County Sheriff’s deputies arrived at the home, they found the first suspect still in the home with a single gunshot wound. He was pronounced dead at the scene.

Surprisingly, “He’s never used a firearm — ever,” the boy’s father told reporters. “He maintained his poise and did extremely well under the circumstances.”

The teen was not injured during the incident, but remains shaken up over it. “He’s okay. He’s never been faced with anything like this,” Patmon said.

Neighbors are applauding the brave actions of the boy and say that he did the right thing.

“He’s out working hard and his kid is at home minding his own business and there’s someone trying to break into his house,” one neighbor, Warren Austin, told reporters. “Luckily that kid had a way to defend himself.”

Austin added, “It’s unfortunate that a life was taken, but at the same time, it’s very fortunate that this guy had a way to defend himself.”

Another neighbor, Ceja Decker simply said, “Sometimes when you’re a criminal things come back and bite you.” In this case, it was a bullet that bit back.

The 18-year-old, whose father said “he’s never been in trouble a day in his life,” recently graduated from high school and is getting ready to join the Air Force.