A 24-year-old New York deli worker fended off an armed robber, chasing him out of the shop with a machete. 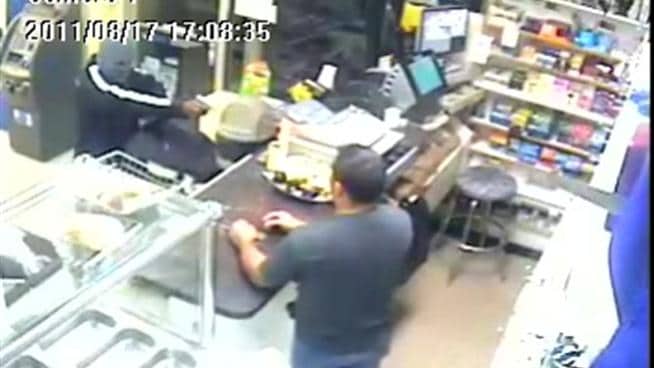 Calm, cool and collected, the store clerk waits for the right moment before pulling a machete from underneath the counter.

The masked robber burst through the doors of the Stop & Shop Deli on Crooked Hill Road in Brentwood September 25, firing rounds from his .22-caliber pistol as he demanded the worker to fill his Air Jordan backpack with cash from the register, according to Long Island police.

In the video from LiveLeak, the deli owner, seemingly unfazed by the armed intruder, grabs a machete from underneath the counter, unsheathes the shimmering blade and hacks through the air as he rapidly advances on the now retreating crook.

The machete had been sitting underneath the counter for less than a month before it was needed. The deli owner, Elena Alvarado, told NBC 4 New York she stored the blade “for protection,” saying her deli had been broken into at least a dozen times before.

Concerned more for the safety of her employees than the money in her registers, Alvarado said she was upset the worker chased the suspect, saying it was a risky move. 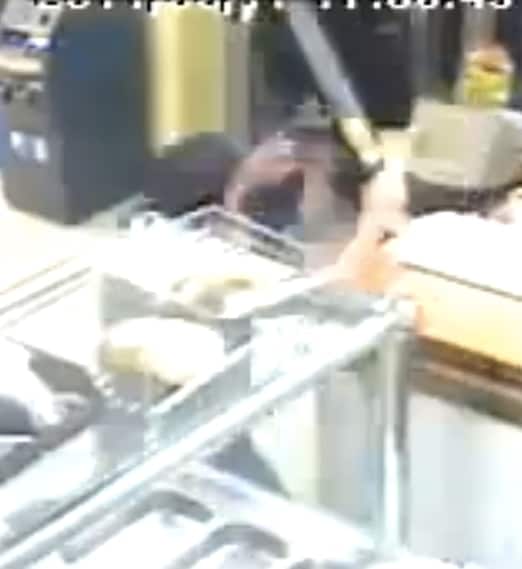 The clerk unsheathes a massive machete, hacking through the air as he advances on the robber.

“You can make money again, but not your life,” she said.

Police said the time stamp on the CCTV video, which says August 2011, is a glitch from the camera system and is not accurate.

The Suffolk County Crime Stoppers are offering a reward of $5,000 to anyone that can provide information leading to an arrest. They can be contacted at 1-800-220-TIPS.