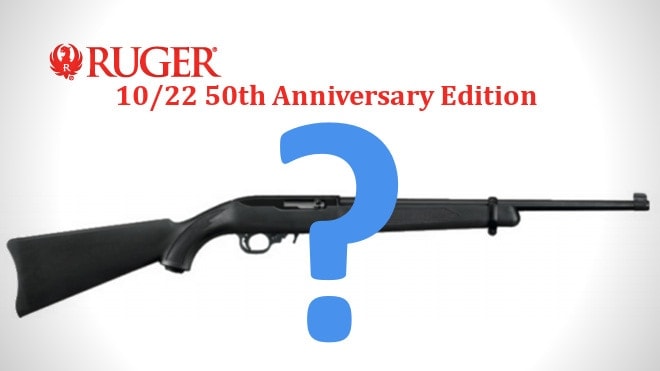 For the 50th anniversary of the 10/22, one of America’s most beloved rifles, Ruger is holding a contest to decide how to celebrate the design, and come up with a new commemorative edition that will be added to the Ruger catalog.

Designing a new 50th Anniversary Edition 10/22 may be a bit difficult as the base model has been expanded through many different versions for shooters of all types. But there are still countless modifications out there, and Ruger is happy to see what people deliver.

“To enter for a chance to win, submit a photo of your customized rifle, an itemized parts list and a brief description of your design between now and 12:00 p.m. ET on Friday, October 18,” explains the design contest page.

“We’ll select ten finalists based on the style of their submitted design, Ruger’s ability to produce, and its appeal to Ruger consumers. Then, we’ll let Ruger fans vote for their favorite design.”

While it seems they’re leaning towards a series of off-the-shelf upgrades, we would not be surprised if Ruger, and Ruger enthusiasts, settle on something really unique.

The winning 10/22 design will no doubt stand out, as Ruger’s current offerings range from inexpensive and practical to entry-level competition to the ultimate tactical rimfire rifle.

It would be impossible to guess what kinds of rifle designs this contest will elicit, let alone which one will be chosen to be the 50th Anniversary Edition.

Once all submissions are received and evaluated, Ruger will select the ten designs to enter a final contest, where fans will get to vote for which model will be the 50th Anniversary Edition.

Ruger will start taking votes Monday, October 21 through Friday, November 1. People will get the opportunity to place one vote per day. They can vote for one design multiple times or vote for multiple different designs if they want to spread the love around.

The ten finalists will be awarded prizes, too. The grand prize winner and designer of the 50th Anniversary Edition 10/22 will win a copy of their design and $5,000 in Ruger swag. The other nine finalists will each win a Ruger firearm of their choice.