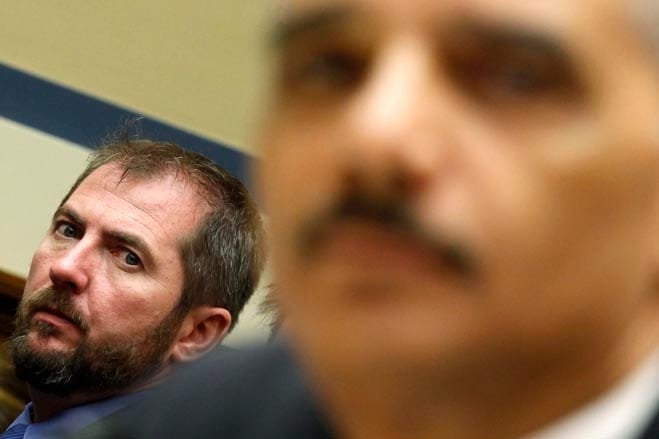 John Dodson, whistleblower and special agent for the ATF, looking at U.S Attorney General Eric Holder — or the photographer.

The Bureau of Alcohol, Tobacco, Firearms and Explosives is not allowing federal agent John Dodson, the main whistleblower who helped expose Operation Fast and Furious, to publish his book about the fatally-flawed, gun-walking program that sent upwards of 2,000 firearms across the border and into the hands of Mexican drug cartels.

The ATF is attempting to block the publication of Dodson’s book because it claims it would hurt the morale of the agency and damage its relationship with other departments.

“This would have a negative impact on morale in the Phoenix [Field Division] and would have a detrimental effect on our relationships with DEA and FBI,” the official rejection letter read.

The ATF general counsel’s office backed the decision, citing a policy that gives the agency carte blanche to refuse one’s request for outside employment.

“An employee’s supervisory chain may disapprove any outside employment request for any reason, at any supervisory level,” ATF attorney Greg Serres wrote Dodson on Aug. 29, as the Washington Times reported.

Serres underlined the word “any” to drive the point home, and then added, “The Office of Chief Counsel cannot approve outside employment requests in lieu of the supervisory chain’s disapproval.  Therefore, your request to engage in outside employment is denied.”

In response to this refusal, Dodson received legal aid from The American Civil Liberties Union, which filed a protest against the ATF, arguing that the agency is violating certain “constitutional protections.”

“It was Agent Dodson’s disclosures that helped bring the operational failures at the Phoenix field division to light,” the ACLU said in a letter to ATF Deputy Director Thomas E. Brandon. “As a knowledgeable and informed ‘insider’ who was directly involved in Operation Fast and Furious, Agent Dodson will add significantly to the national conversation about gun policy.”

“This isn’t the first time somebody from the ATF or another government agency has written a book,” Grassley told The Washington Times. “Just because the ATF leadership doesn’t like the content of the book doesn’t mean they should be able to prevent the author from giving his side of the story.”

Under the auspices of the Department of Justice and the ATF, federal agents instructed law-abiding and responsible gun dealers to sell weapons to suspected straw purchasers who had ties to known Mexican drug cartels.  The goal of Fast and Furious was to trace these firearms back to cartel leaders so that law enforcement, on both sides of the border, could make one big raid.

Of course, that never happened.  In part, because Mexican officials were largely in the dark about the operation, but also because DOJ and ATF leadership proved to be grossly incompetent, as congressional investigators noted in a Joint Staff Report that extensively examined the operation.

Agent Dodson validated this assessment, telling house investigators that he and fellow agents were ordered to forgo surveillance of suspicious gun purchases, “knowing all the while that just days after these purchases, the guns that we saw these individuals buy would begin turning up at crime scenes in the United States and Mexico.”

In his official testimony Dodson added, “ATF is supposed to be the sheepdog that protects against the wolves that prey on our southern border, but rather than meet the wolf head-on, we sharpened its teeth and added number to its claws. All the while, we sat idly by watching, tracking and noting as it became a more efficient killer.”

Around 2,000 firearms crossed the U.S.-Mexico border undeterred as a result of Fast and Furious.  Approximately 1,400 of those firearms are still unaccounted for.

Looking ahead, Dodson may still be allowed to publish his book so long as it doesn’t contain any “sensitive” material.   However, there’s one catch: he wouldn’t be allowed to make a cent from the book.

A law enforcement official told the Washington Post that a government-wide ban prevents federal employees from receiving compensation “from any source other than the government for teaching, speaking or writing that relates to the employee’s official duties.”

The book is being currently reviewed by another ATF panel to ensure that it doesn’t reveal any classified material.  Should it pass this test, Dodson may get the green light but, again, he wouldn’t be able to profit from it.