Guns, girls, gore, Gibson, and Gaga. Sure, that’s a lot of g’s, but when you have a movie like Machete Kills – a movie that only scratches the surface with Sofia Vergara shooting breast-mounted Gatling guns, real-life trained shooter Michelle Rodriguez wearing an oddly attractive eye-patch, and singer turned actor Lady Gaga sporting vampiric looking red fingernails – you need all the g’s you can get.

Make sense? Neither does Charlie Sheen as president. The movie, starring Danny Trejo as Machete, is scheduled to be released October 11 and follows the impossibly suave ex-Federale agent through his blood-smeared journey to thwart a maniacal billionaire arms dealer (Mel Gibson) who aims to bathe the planet in war.

With an IMDB rating of 6.1 out of 10, it’s not the worst movie that’s ever been produced. And with all the stunning visuals that are sure to be overtly placed throughout the entire movie, it’ll probably be watchable.

But if you’re looking for an adrenaline pumping, machete hacking, gun blasting movie that also has Cuba Gooding Jr. AND Antonio Banderas in it, well, you’ve found it. 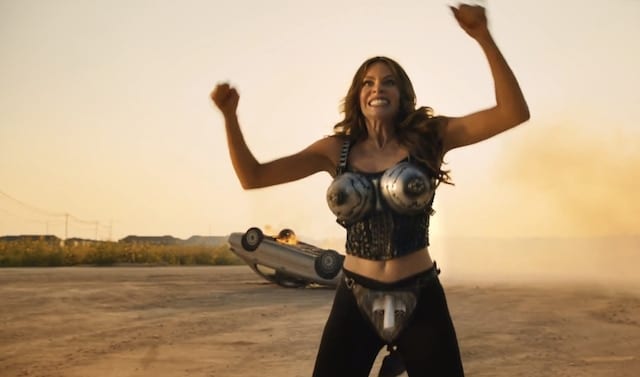 Sofia Vergara wigging out while sporting her gun bra.