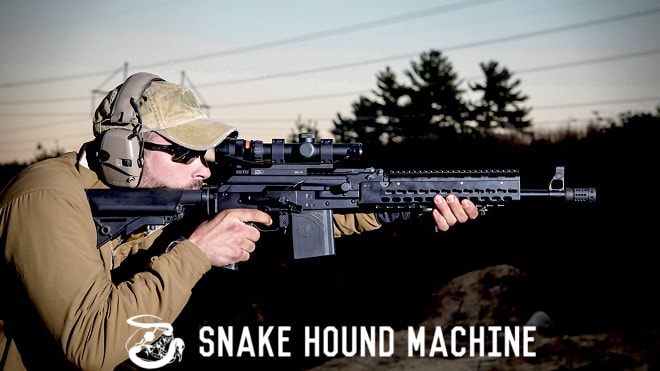 Snake Hound Machine (SHM) wants to change what people think of the AK platform. They’re a dedicated group of gunsmiths that love the entire AK family of firearms, and they’re doing something really sweet with Veprs.

SHM is taking Veprs chambered for the hard-hitting, big-bore .308 Winchester and is building real “designated marksman rifle” or DMR-type guns with them. This isn’t just a change in furniture, they’re not just slapping rails on these rifles and calling it good — their goal is to make rifles that are capable of making very tight groups with off-the-shelf ammo.

Considering how overbuilt Veprs are, they are a strong candidate for accuratizing. 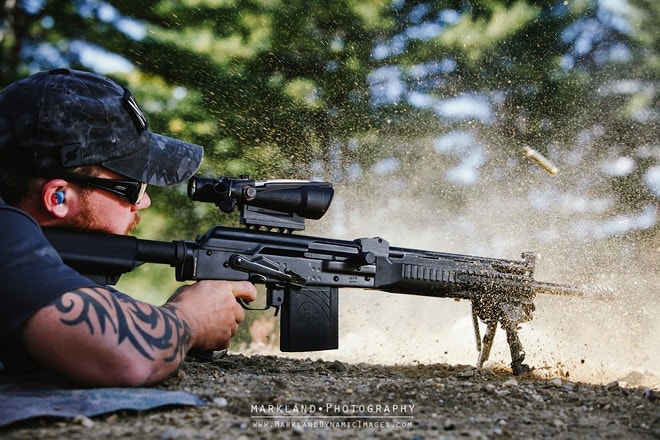 “These rifles are rebuilt from the original crown-to-buttstock with new springs and pins, everything hand polished and fine tuned to give the best possible recoil mitigation and reliability available in the platform. We have experienced 1MOA on average with factory ammo.”

As carbines, they have compact 16.5-inch barrels, which have been fit with the Ares Armor Effin-A compensator, which is one of the most effective muzzle devices we’ve ever seen.

All of the internals have been polished to ensure smooth operation and the fire control group replaced with an in-house custom trigger. The traditional furniture is dropped in favor of a railed SGM Tactical railed handguard, a US Palm pistol grip, a Rifle Dynamics AK/AR stock adapter and a B5 Systems SOPMOD Bravo stock. SHM knows their parts and have cherry-picked the best for their Veprs.

The upgrades don’t stop there. They replace the standard safety/ejection port cover with a Krebs Enhanced safety and fit the bolt carrier with a Tromix oversized bolt knob.

Each rifle ships with one 5-round and one 10-round factory polymer magazine. 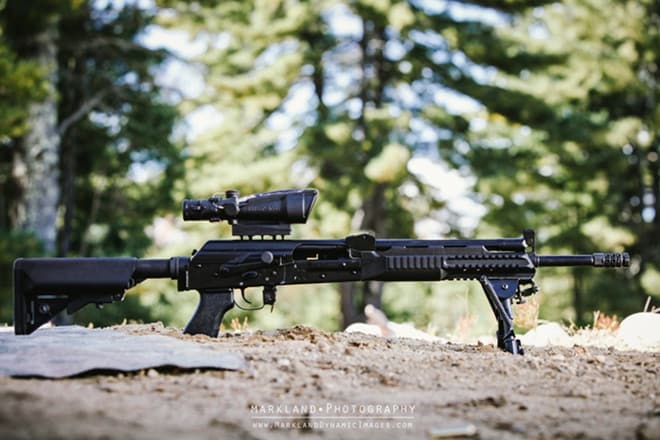 The Standard comes with the lightweight polymer SGM Tactical handguard, while the TWS and Keymod is shipped with a Texas Weapon Systems Dog Leg Rail dust cover upgrade and a Krebs Vepr Keymod Rail, an SHM exclusive for now.

Keymod rails are a new, open-source modular accessory mounting system developed by Vltor, and can be used with standard Picatinny rails as well. The Krebs handguard adds some, but not much weight. The Standard weighs eight pounds one ounce and the TWS and Keymod weighs just eight pounds, nine ounces.

The California Express is based on the Standard but includes a Solar Tactical magazine lock and a guarantee to ship before any possible expansion of the California “assault weapon” laws are passed. Otherwise the lead time on an order is about ten weeks.

These heavily-customized Veprs are not for those on a tight budget, although considering the degree of the modifications, they really aren’t priced outrageously. Depending on the model, SHM 308 Vepr Carbines run between $2,200 and $2,600. When it comes to premium .308 semi-automatic rifles, you could spend a lot more and not have something close to these.

For all the details and more fantastic photos of these rifles in action, head over to the Snake Hound Machine product page, and check out their Facebook page, too.