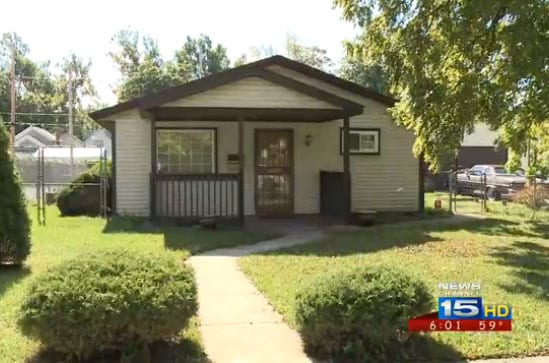 Neighbor Willis Bolin said that the neighborhood is one where they all look out for each other and they are usually aware when something isn’t right at someone else’s house. (Photo credit: Wane.com)

An attempted home invasion in Fort Wayne, Indiana late Sunday night had a deadly ending for the suspect, who was met at the door by an armed Vietnam vet.

It was just before midnight when the homeowner, who has not been identified, heard unfamiliar noises outside his front door. Spokesman for the Fort Wayne Police Department, Michael Joyner told reporters that whatever the noise was, it was enough for the homeowner to know that something wasn’t right.

The homeowner, who is in his 70s, grabbed his gun and went to see what the commotion was about. What he found was 33-year-old Ricardo M. Hood attempting to break into his home. At some point during the confrontation, the homeowner fired several shots at Hood.

When police arrived a few minutes later they found Hood lying on the front porch with multiple gunshot wounds. He was pronounced dead at the scene by paramedics.

Authorities did not indicate whether or not Hood made it into the house before he was shot.

Neighbor Willis Bolin has lived across the street from the man for six years. “I knew he had a gun over there. I knew he wasn’t going to let anyone rob him,” Bolin said. “He’s a real good neighbor and the nicest guy you would ever want to know. If he had to shoot him, he had to make that call fast. He’s not a violent person.”

There has been a recent string of break-ins in the city’s south side, in which one arrest has already been made previously, but police believe that this was an isolated incident and not related to the other burglaries.

Nonetheless, Bolin believes local criminals should take note of the weekend incident. “It should send a message,” he said, “and if they don’t heed it, I guess they get what they get.”

Hood’s death was the 35th homicide of the year for both Fort Wayne and Allen County. However, although Hood’s death was ruled a homicide, that doesn’t necessarily mean that the homeowner will face any charges. By definition homicide simply means that one life was taken at the hands of another.

“If it had to go to that level of lethal force used to protect myself, my property or my family, that in the eyes of courts is seen as justified homicide,” Joyner explained. “But investigators are still putting together a complete package of what they think happened and the prosecuting attorney will have the opportunity to review all that.”

The incident remains under investigation, but the initial review indicates that the man fired in self-defense.

The homeowner, who has lived in the home for several decades, was not injured.