Belgian firefighters protested national budget cuts for the fire department in the most sinister of way, they doused the riot police with foaming bubbles.

Everybody loves firefighters, and this is just one more reason why. With a blazing pile of tires puffing huge plumes of black smoke into the sky, a group of firefighters posed for a picture as they peaceably protested their cut in pay, insurance benefits and insufficient staffing, Russia Today reported. 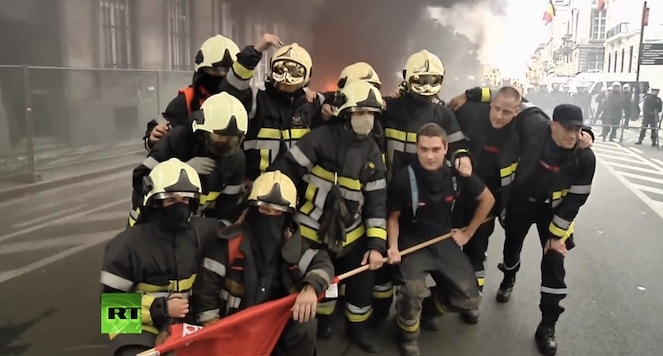 Belgian firefighters pose for a picture as they protest pay cuts.

Firefighters from around the country congregated in Brussels to show their support, parking their fire engines in front of the Prime Minister’s office and blocking off roadways.

Standing in a knee-deep bubble bath, the police continued to guard the protest as they wiped away the accumulating film of soap from their visors.

They fought fire with… bubbles, dousing the riot police with a glorious bubble bath. 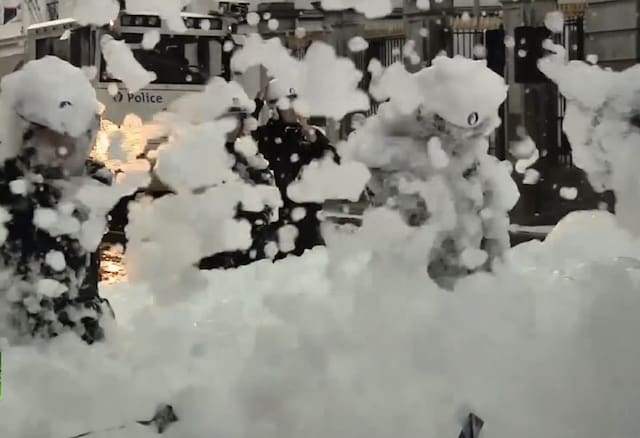 They used large fans to blow the bubbles onto the riot police. A riot police officer wipes his visor after being smothered with bubbles.

The protest waned on into the night, but no comment was made as to what influence it held over the new Belgian budget.