Eddie Vedder on opponents of gun control: 'I almost wish bad things upon these people' (VIDEO)

Pearl Jam’s frontman Eddie Vedder is ticked off at those who oppose tougher gun control laws.  Really ticked off.  In an interview with Mark Richards, a professional surfer, Vedder vented some of his ire with the gun community.

“The fact that we’re living in a country where 90 percent of the people want further gun laws — to maybe somehow put a dent in some of this insanity that’s happening — and yet there’s no further legislation taking place, it’s very frustrating and upsetting,” Vedder told Richards in a clip from the discussion, which HuffPost Entertainment released.

“If I didn’t have music to kind of at least get some of the aggression out or take the edge off, you wouldn’t want me having a gun either,” he added.

If that wasn’t bad enough, Vedder’s pent-up rage seemed to boil over into ill-will toward those who have protested tougher gun laws.

“I get so angry that I almost wish bad things upon these people,” Vedder continued. “But I don’t have to because it seems like they happen anyways. It seems like every week I’m reading about a 4-year-old either shooting their sister, their dad, their dog, their brother or themselves, because there’s fucking guns laying around. But I guess it’s ‘fun.'”

I freakin love Pearl Jam.  Their music is awesome, particularly their earlier stuff.  There’s zero doubt about that.  And as a product of the 90s, it would be blasphemy to say otherwise. 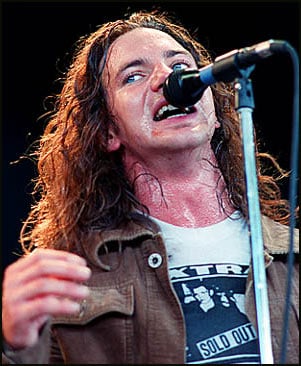 So, when I recently watched this video of Vedder lambasting gun owners or those who oppose tougher gun control laws my first reaction was: NOOOooooo!  Not you too, Eddie Vedder!

Listen, was I surprised Vedder is rabidly pro-gun control?  Heck no!  Vedder, after all, is known for his left-wing/liberal views (though, in fairness to Libs, they’re not all pro-gun control).  But at the same time, I never really thought about Vedder’s views on guns before.  I had no reason to and I didn’t really care what they were.  Now, though, after this video, I feel compelled to respond.

For starters, I know the default reaction to Vedder’s words is to call him names, e.g. “Vedder is a no-talent, bug-eyed psycho.”  To hate on his music, e.g. “Pearl Jam is the poor man’s Creed.”  To pretend that he isn’t one of the best rock vocalists in history even though Rolling Stone ranked him #7 on the list of “Best Lead Singers of All Time.”

However, to engage in these ad hominem attacks or to try to dismiss what he’s accomplished in rock music only makes one look foolish and bitter.  The reality is that Vedder, like many famous people, is misinformed on the issue.  This is plainly evident throughout the interview, for example when he says that the Second Amendment is “antiquated” or when he argues that the only semi-convincing reason there is for one to own a firearm is because it’s “fun.”

While owning firearms is indeed “fun,” it is not the reason most folks choose to exercise their Second Amendment rights.  The reason people own guns is because they save lives.  That’s right.  Guns save lives.  Anyone who reads Guns.com on a regular basis knows this.  We publish defensive gun use stories daily.  These stories involve regular people using firearms to protect themselves, their family and their property from criminals.

But Vedder shouldn’t take our word for it, he should listen to the Centers for Disease Control and Prevention which recently released a study that found that firearms are much more likely to be used in a defensive manner rather than for criminal or violent activity.

“Defensive uses of guns by crime victims is a common occurrence, although the exact number remains disputed.  Almost all national survey estimates indicate that defensive gun uses by victims are at least as common as offensive uses by criminals, with estimates of annual uses ranging from about 500,000 to more than 3 million per year, in the context of about 300,000 violent crimes involving firearms in 2008.”

Self-defense is a fundamental right.  One can’t deny that even if he/she believes that the Second Amendment is antiquated.  Owning a firearm helps to ensure than one can defend oneself if need be, particularly in situations where their is a disparity of force, i.e. an elderly woman against a thug (see video below).

Vedder should recognize this fact.  If/when he does, I bet he’ll be less inclined to wish “bad things upon” those who want to protect their right to keep and bear arms.