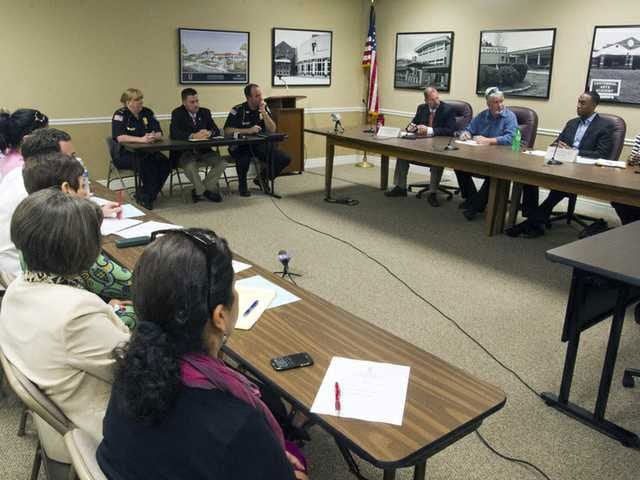 Parents, teachers and other concerned individuals attend a meeting with the Gainesville Police Department last week to answer questions and concerns over arming the school resource officers with M4s. (Photo credit: Gainesville Times)

It’s a proposal that has already been on the books for nearly six months, but last week parents, teachers and other staff from a Georgia school district met with the Gainesville Police Department to discuss questions and concerns over equipping the school’s resource officers with M4 carbines for protection against possible mass shootings, the Gainesville Times reported.

The idea was originally submitted to the schools by the police department back in April after the shooting at Sandy Hook in Newtown, Connecticut left many schools reevaluating their current security systems to protect against such atrocities. Though the issue was not hastily pushed, it was revisited again following a close call with an armed gunman at a DeKalb County school in August.

“I was on the school governance council when it first came up just as a memorandum for us to approve,” said Ashley Bell, chairman of the Gainesville High governance council. “I think it’s appropriate that they had this meeting today because there were some questions initially.”

Bell explained, “Now we have a good understanding for three big questions, which are: Is this going to make our kids safer? How much is it going to cost? And will these weapons be secure?”

Gainesville Police Chief Brian Kelly said the department’s “first and foremost” priority is “protection of life.” Kelly explained that the schools have many long corridors and large spaces and in the event of an active shooter scenario, a rifle, which is designed for hitting targets at a longer distance, would be a more effective tool versus a handgun, which the school resource officers currently carry. 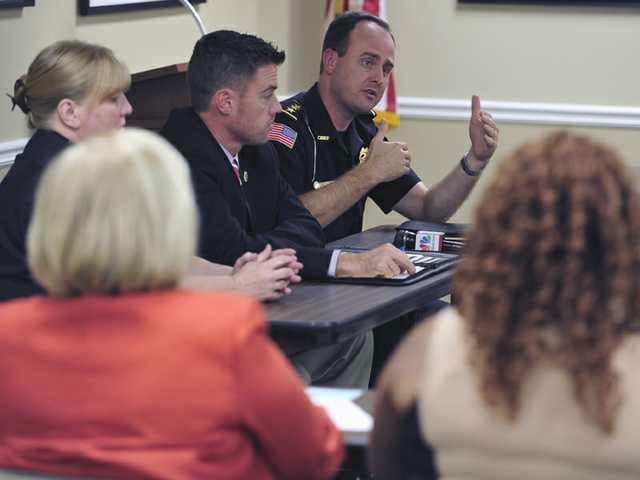 Officers from the Gainesville Police Department answer questions proposed by teachers and parents over stocking the schools with M4s. (Photo credit: Gainesville Times)

And, of course, of great concern is whether or not the rifles will be secured in the school. The plan proposes storing the rifles in a safe within the facility while a school resource officer is on duty. The safes will only be accessible, via fingerprint recognition, by the officers. However, the firearms will not be left at the school outside of school hours, but rather securely stored in the officer’s vehicle during off hours.

Currently the school resource officers are only assigned to the middle and high schools and, although they do regular visits and have other responsibilities there, they do not presently guard the elementary schools. However, the department is hoping to add more resource officers to the schools in the future.

“It’s something that’s important in our community and our schools,” Gainesville High teacher Bryant Tench said. “We just want to be sure everyone is safe.”

Parents and teachers alike admitted that they felt better about the proposed plan after talking with the police department during the meeting last week. 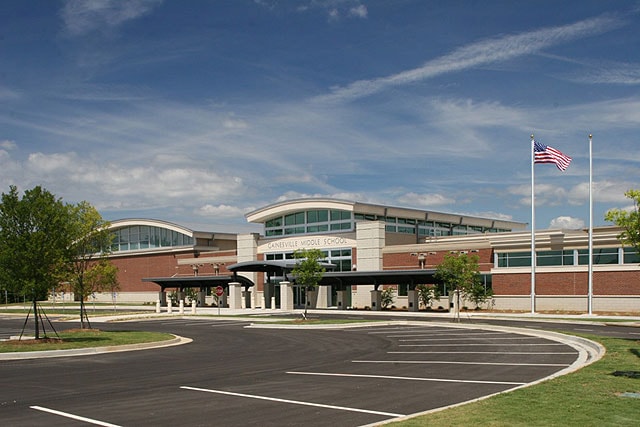 The school board has delayed voting on the issue until it has talked with the school governance councils. However, Gainesville Middle School has already discussed and voted on the proposal, choosing to support the initiative. The remaining two school councils will likely vote on the subject sometime this month, then send their votes to the school board.

Superintendent Merrianne Dyer hopes the school board will also be able to vote on the proposed plan this month as well.