The MADSS is one mean robot. Developed by defense industry leader Northrop Grumman and currently being showcased at the Fort Benning, Ga. “Robotics Rodeo,” the MADSS is a 1 1/2-ton unmanned ground vehicle designed to provide soldiers with covering fire while cutting down targets.

Make no mistake, it’s an automatic shooting machine, But it requires people to operate it and set targets. The MADSS — Mobile Armed Dismount Support System — tracks and fires on targets only once it gets the green light. It won’t shoot unless a soldier is directing it.

It’s half killer robot, half killer giant remote-control car. While its top speed hasn’t been stated, Northrop Grumman has said that it can follow troops on foot at about five miles an hour over rough terrain that conventional combat vehicles would find impassable. 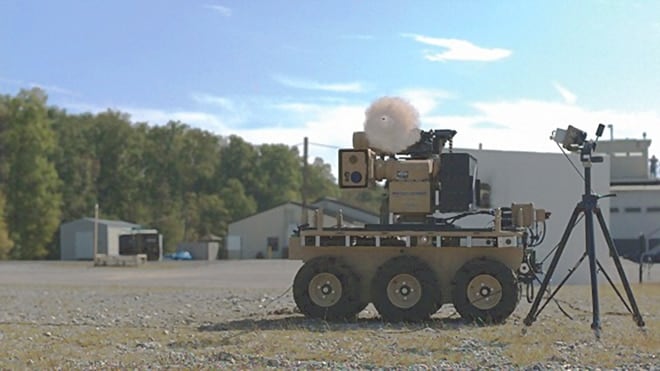 The MADSS is somewhat modular and can be fit with a wide array of weaponry from M240s and M249s to Mk 19 40mm automatic grenade launchers and Ma Deuces. Northrop Grumman has also alluded to 25 and 30mm weapon systems, which likely means autocannons — this may be one of the most terrifying land robots outside of science fiction.

Capable of serving multiple roles depending on how it’s equipped, the MADSS is also a load-bearer. The robot can be used to store and haul supplies, weapons and ammo or whatever else is called for.

That is because it’s a variant of another new Northrop Grumman vehicle, the Carry-all Modular Equipment Landrover, or CaMEL, which is an un-armed remote-control vehicle built for freight.

Also attending the Robot Rodeo, the CaMEL can be used for different missions, including mine routes, but it’s decidedly less of an attention-getter than the MADSS — unless you happen to carry a hundred pounds of gear on your back, in which case the CaMEL might be the real dream machine.

Whether or not they enter service is something we may not know for years. This is an early look at the designs and not an evaluation. However, the demonstration may lead to bids and competitions, opening the door for these all-terrain robots in the future.

“So we’re years away from seeing MADSS or another remote-controlled combat robot in the field, and probably decades from seeing one so sophisticated the Army trusts it to pick a target on its own,” explains Breaking Defense. “But the military’s fiscal incentive to replace expensive humans with sophisticated machines — and the American public’s deep distaste for taking casualties — means we are definitely heading down that road.”

We know a few technical details about the CaMEL, which was unveiled earlier this year, and we expect similar performance for the MADSS.

The CaMEL uses a hybrid diesel-electric powertrain that runs six independent electric motors, one for each wheel, that provides over than 20 hours of continuous operations on 3.5 gallons of fuel. That’s while hauling 1,000 pounds of cargo.

It would still be interesting to know how many targets can the MADSS track and a what sort of ranges, and just more information about these vehicles in general. The MADSS is scheduled for a live-fire demonstration Thursday. Hopefully we will be able to find out more very soon.