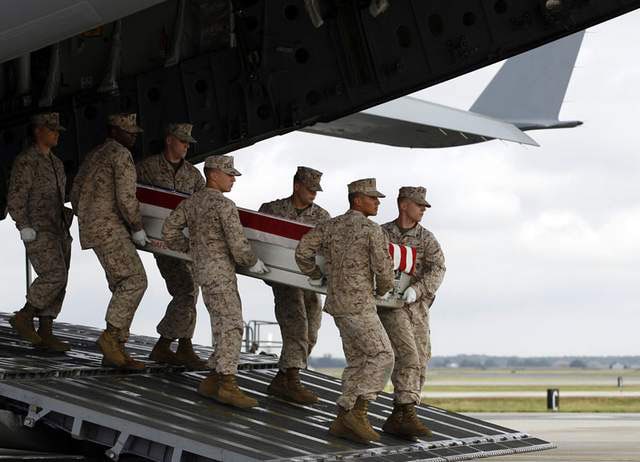 As the country endures the second week of the government shutdown more details are emerging as to what’s considered essential and non-essential at this time. And apparently, according to Reuters, benefits owed to the families of fallen troops are not on the list of top priorities. It’s an act of Congress that’s being called both shameful and disgusting, among other things.

“It’s a disgrace,” said Paul Rieckhoff of the Iraq and Afghanistan Veterans of America. “The fact that those families have to deal with this now is just sad and shocking.”

Typically, families of active duty military members who have died receive a $100,000 tax-free benefit, which is usually paid within days of the soldier’s death and can help to cover immediately needed funds for things such as burial costs as well as associated expenses like airfare and hotel fees. In addition, families can receive other payments, including a $6,000 to $9,000 fund to specifically cover funeral costs, as well a housing allowance for surviving spouses and dependents. But all of these benefits are currently being denied to service members’ families during the shutdown.

The families are now instead basically being given an IOU, and in the meantime following the devastating news of being told of a loved-one’s death, they’re also being slapped in the face with a denial of the benefits that they are owed.

“It is upsetting because my husband died for his country and now his family is left to worry,” said Ashley Peters of Springfield, Missouri, whose husband, Jeremy, was a special agent assigned to the Army’s 5th Military Police Battalion and was among five killed over the weekend. “My husband always said if something happened to him we would be taken care of.”

“I’m a stay-at-home mom, which is what my husband wanted,” she said. “He wanted me to take care of our son.”

And now, for at least the time being, Peters is left to take care of her son on her own, with no help from the government of the country her husband gave his life to protect.

But Peters isn’t alone either. In fact, according to the Military Times, since the Oct. 1 shutdown, six soldiers have been killed in Afghanistan, pushing the total past 100 for the year and well over 6,000 since the beginning of the war 12 years ago.

However, the death benefits for military families aren’t just limited to those serving overseas either; they’re for any active duty service member, regardless of the manner in which they die. Taking this into account, there have been at least 17 families who have been denied benefits over the last nine days during the government shutdown.

“I am waiting for the moment they breach my contract,” he wrote. “Just waiting, I am out here in Afghan so I can’t just leave, but I can sit the f– down and not give two s—-, get it together Obama and not to mention Congress. Jesus! Make up your minds, I will protect the being of my country with my life, but do not go f—— with the men and women that protect your sorry a—-.”

Collins died two days later. His death remains under investigation and his family has been added to those who have been denied benefits.

“We have some heart-rending situations,” Pentagon Comptroller Robert Hale said in a briefing on the legal interpretation of the “Pay Our Military Act” which was signed by President Barack Obama just hours before the shutdown started.

“We’ve had a number of people die recently and we will be able to pay them, but not until the lapse of appropriation ends,” Hale explained matter-of-factly.

Apparently, according to a legal interpretation of the act, it was worded in such a way to ensure that troops were paid during the shutdown, yet did not allow payments to family members. And although the Pentagon assures that those payments will be made after the government resumes working, it’s unclear at this point when that will be.

California Rep. Duncan Hunter, a Marine reservist who has served in both Iraq and Afghanistan, urged Defense Secretary Chuck Hagel in a letter to focus on reading the law’s intent differently.

“The Department’s decision to not make these payments is a matter of choice. And until a correction is made to the law, it is up to you to make the appropriate judgment based on a more correct interpretation. Insisting Congress is needed to fix the situation overstates the complexity of the problem and deflects responsibility,” Hunter wrote Tuesday.

Pentagon spokesman, Navy Lt. Cmdr. Nate Christensen declined to comment on the letter, but stated that Hagel would respond directly.

And to add further injury to insult, while the government doesn’t see benefits for military families as an immediate necessity, according to an article by Think Progress, apparently such things like the House member’s gym, which includes heated indoor swimming pools, basketball courts, a sauna, a steam room and flat screen TVs, is important enough to remain open during the shutdown. And while the towel service is currently unavailable, taxpayers are still forking over the money for daily cleaning and maintenance of the gym.

“If Congress were trapped in a car that sunk down in a river, I would swim to the window, and I would look them all in the eye and say, ‘Suck water,’” said Randall Patterson, who also used an expletive to describe the members of Congress who “are still getting paid.” Patterson’s son, Pfc. Cody Patterson, was one of four soldiers who were killed Sunday by an improvised bomb in Zhari.

Fortunately, there is at least one organization that has stepped up to the plate in an effort to help take care of families of fallen soldiers that are being tossed on the back burner during the government shutdown. The Fisher House Foundation of Bethesda, Maryland has generously offered to provide grants, which will cover flight, hotel and other incidental expenses, for the families until the government can make arrangements to reimburse the foundation.

“After losing a loved one in service to our nation, these families should not have to endure more pain as the result of political squabbling,” Ken Fisher, the foundation’s chairman and chief executive, said.

Gayle Tzemach Lemmon, a senior fellow at the Council on Foreign Relations, pointed out in a Defense One article that the U.S. had never dealt with both a war and a government shutdown at the same time, and expressed, “The casualties of war do not stop just because Washington does.”