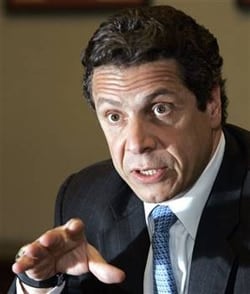 The word “draconian” gets thrown around a lot when gun owners refer to new gun laws, but never has it been so fitting than when one uses it to describe Gov. Andrew Cuomo’s sweeping gun control law, the New York SAFE Act or Secure Firearms and Enforcement Act.

For evidence of its draconian status one needs to look no farther than a 20-page “field guide” recently issued by the New York State Police that concisely recapitulates the law, its penalties while also instructing troopers and other law enforcement personnel on how to enforce the confiscatory gun law.

As noted in previous Guns.com articles, the SAFE Act implemented a number of inane measures that restrict the rights of law-abiding gun owners; among them, it strengthened the state’s ban on “assault weapons” by broadening the definition (changing the criteria from two cosmetic features, e.g. barrel shroud and a pistol grip, down to just one, e.g. a barrel shroud) and required registration of all the newly defined “assault weapons.”

Gun owners will be allowed to own their registered “assault weapons” for life.  However, they are prohibited from passing them down to family members or friends.  Instead, they must destroy them, turn them over to state police or sell them out of state.  Again, a de facto way to dry up the supply of these commonly owned firearms.

All of the aforementioned is reiterated in the field guide.  As for how state and local police agencies are to enforce these new laws, the field guide states the following:

It doesn’t take a powerful imagination to see how this law subverts the rights of gun owners.  For starters, most honest cops will tell you that it doesn’t take a whole lot to establish “probable cause” or an “indication of criminal activity.”  Hence, it’s reasonable to assume that law-abiding citizens will be victimized by these overly-scrupulous laws (counting the number of rounds in one’s 10-round magazine — really?)

But more fundamentally, the notion that one needs to produce a permit to avoid a search of his/her private property runs contrary to the founding principle that one “has a right to keep and bear arms” and that that right “shall not be infringed.”  Does it not?

What about for self-defense inside one’s home.  Shouldn’t the home owner get to decide how many rounds he/she needs to best protect his/her family and property?

Logical questions that may explain why the New York State Sheriff’s Association joined a lawsuit that seeks to have the law repealed and why the Troopers PBA admitted to having “widely shared concerns over this new law.”

Though, of course, from Cuomo’s perspective, he wants all police agencies to enforce the SAFE Act, regardless of whether it’s constitutional or not because that’s what these sworn men and women are tasked to do.

Some believe that due to the controversial nature of the law, most police officers won’t actively enforce it, that it will only come into play when charging individuals with a criminal history.

“These guys [police officers] want nothing to do with the SAFE Act, and they are not going to enforce the SAFE Act, except if they have a bad guy and they are putting him under arrest and there are other charges,” Assemblyman Bill Nojay (R-Pittsford) told USA Today.

Nojay is either greatly misinformed or supremely naive or both.  The new magazine and “assault weapon” bans are in effect, the new registration system is up and running, the “field guide” has been issued.  The SAFE Act is the law of the land.   While it may be be true that not all police officers will enforce it, one can be assured that enough of them will to put responsible gun owners jeopardy.  Heck, even if one law-abiding gun owner is charged under the SAFE Act, that’s one too many.

Bottom line: it needs to be repealed.